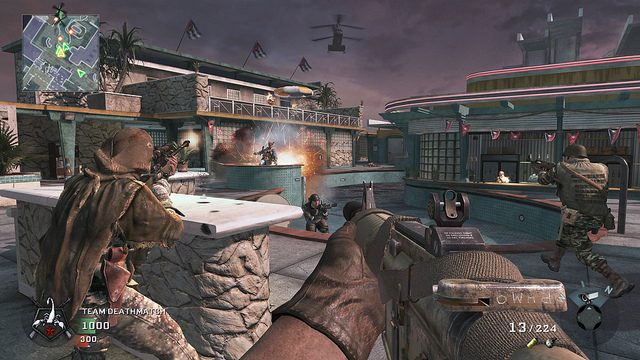 Hopefully everybody enjoyed the double XP period for Call of Duty: Black Ops in May – neither Treyarch nor Activision wanted to see any of the PS3 fans miss out just because of the technical issues. Now the next round of Black Ops action is locked and loaded: the long-awaited Escalation DLC pack will be available in the PlayStation Store on Friday, June 10th.

Escalation features five big chunks of content – four multiplayer maps and one star-studded Zombies experience unlike any other. For fans of competitive combat, your new battlegrounds await:

Last but not least, CALL OF THE DEAD goes meta on zombie lore itself with a unique setup: Cinema’s zombie godfather George A. Romero is making his latest undead epic – starring Sarah Michelle Gellar, Robert Englund, Michael Rooker, and Danny Trejo – only to have a real zombie apocalypse break out, infecting the director himself and causing him to stalk you throughout the level. All the stars performed their roles with full motion capture and voice-over, so when you and three friends take on wave after wave of the zombie horde, you’ll do so as some of Hollywood’s most famous monster mashers. Proof positive that there’s a zombie killer in all of us.

Escalation will be available in the PlayStation Store on Friday, June 10, and to celebrate, the double XP will flow once more – enjoy twice the rewards for your efforts through Sunday, June 12. It’s also a perfect time to try out some my unorthodox multiplayer strategies that will keep your opponents guessing.