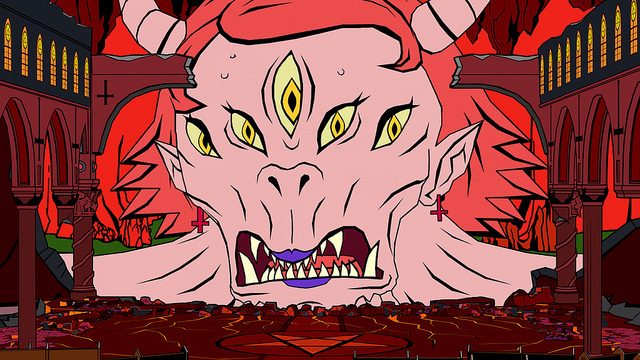 Hi there everyone! Our new game, Ugly Americans: Apocalypsegeddon, is live now on PSN and well worth checking out. It’s got everything you could possibly want: co-op, zombies, demons, tons of weapons, RPG elements, hilariously rude and crude humor, and enough action to keep you going longer than a cockroach could survive a true apocalypse!

For those of you that haven’t been following our development, Ugly Americans: Apocalypsegeddon is a four-player, co-op, dual-analog arcade shooter (think Robotron on crack…with plenty of raving zombies and delinquent man-birds, of course). What’s really fantastic about the game is that we’ve been lucky enough to work extremely closely with the über-talented staff over at the Ugly Americans. All of the voice actors from the show lent their talents to their characters, the writers created a completely new story for the game, and Devin Clark (animator and series creator) came up with all the character design including some insanely twisted end-level bosses. As a result it really feels like you are playing inside an episode of the show, every element from the world of Ugly Americans forms a crucial part of this game experience.

At its core, Apocalypsegeddon is a co-op game that hearkens back to the endless hours I would spend with my buddies playing Gauntlet and Robotron in the arcades – tons and tons of enemies coming at you from all angles, distinctly varied character classes, constant action and simple controls that allow for pick-up-and-play. Add in the ability for either local or live multiplayer co-op and the same hilarious sense of humor that has made the Comedy Central show such a success and you have a recipe for a fun and addictive arcade experience.

Each of the four characters – Mark, Callie, Grimes and Leonard – all feature specific base attributes and special attacks that set them apart from each other. For example, Callie is the fastest character whereas Grimes has the most stamina and plays more like the “tank” archetype. RPG elements have also been tossed into the mix, ensuring that you’ll need to level up the right attributes and equip the right weapons for each boss battle to triumph over world-ending evil!

Finally, one additional important element in the game is finding and adopting demon babies, which basically serve as companions that you tote along with you that can boost certain character attributes or give you special abilities. They look fantastic and definitely serve as another aspect that tie the game back in with the show.

We’re so excited that our game is now ready for everyone to check out and enjoy, as the world of the Ugly Americans show gave us the perfect mix of elements to make a fantastic, memorable game: New York as a background for the action; all sorts of strange creatures including zombies, delinquent man birds, demons and a few humans thrown in for good measure; and a rich mixture of comedic gameplay elements from the twisted minds from the show creators. All this for only $10! Ugly Americans: Apocalypsegeddon is live now on PSN – check it out now and save the world!