PlayStation Plus September Offers: 10 Free Games including Plants vs. Zombies 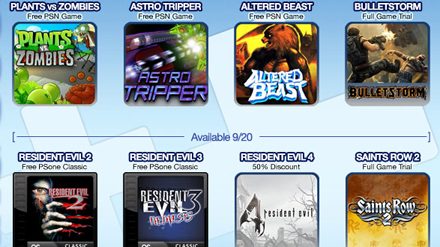 Before we get to what’s coming to PlayStation Plus, we wanted to let you know that starting today, we’re making a slight change to how we communicate PlayStation Plus updates. Instead of posting twice per month on what’s coming to Plus, we’re going to be making one post that gives an overview of all the content that’s hitting Plus in that particular month. So today’s post will cover content coming in September, and the next post will hit in the first Monday of October. Of course, with every week’s Store Update post, you’ll know what’s going on the Store for Plus on that week.

Now to the good stuff! We’ve got some great content this month coming free to Plus subscribers including PopCap’s Plants vs. Zombies, the furious shoot-em-up Astro Tripper, and the final game in the SEGA Genesis Collection, Altered Beast. The value of all three of these titles adds up to more than a $24 savings, which doesn’t include the additional minis and PSone Classics you’ll get this month too. This month also marks a special occasion as we’re celebrating the Resident Evil 15th Anniversary with PSone Classics: Resident Evil Director’s Cut, Resident Evil 2, and Resident Evil 3, all free to PlayStation Plus subscribers starting 9/20, for 2 weeks only. In other PSone Classic news, Jet Moto will also be free starting tomorrow, 9/6.

On the discount side of things, Resident Evil 4 (releasing 9/20 on PSN) and Resident Evil Code Veronica (releasing on 9/27 on PSN) will be 50% off for Plus subscribers as part of the RE 15th Anniversary special. We’ll also offer for 1 week an additional 50% off select LucasArts PSP content on sale for PSN . Check the list below for all the titles in this lineup as well as the other discounts.

There’s tons more including new Full Game Trials, free themes and avatars; all will be coming on the dates noted below for September. Let us know your thoughts in the comments below and enjoy!

(Please keep in mind these are expected release dates. Some content outlined may be subject to change)