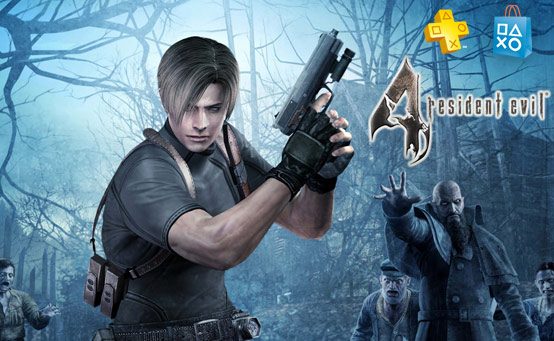 This week, we help celebrate the 15th Anniversary of Resident Evil with a ton of new releases and specials around the network! Least of which is the release of Resident Evil 4 on PSN. The modern classic has been revamped with a visual upgrade, full Trophy support, and the same harrowing gameplay that helped this title redefine action games. If you’re a PlayStation Plus subscriber, you’ll also have access to the 50% discount, day 1 for 1 week only, so don’t wait!

While you’re looking at new PSN releases, keep an eye out for Burnout Crash! and Cubixx HD. Burnout Crash! brings the arcade racer’s attention fully focused on, well…the crashes! With the Autolog feature integrated, you’ll have a blast piling up wrecks and comparing them with your friends. On the other hand, there’s Cubixx HD, the beautiful puzzle game that will have you analyzing your tactics in all 3 dimensions. Cubixx HD features 50 levels of arcade action playable in both single player and seven-player co-op.

And as announced in September’s PlayStation Plus outlook, this week marks all new specials including the first thee Resident Evil PS one classics, free for subscribers! New release Cubixx is also 30% off.

Have a look at the look at the full list below, and make sure you drop your feedback in the comments. For more conversation, head over to the Official PlayStation Store Update thread in the PS Community forums, hosted by PSN Community Manager, Morgan Haro.

Resident Evil 4 ($19.99)
Resident Evil 4, the gold standard of the survival horror genre, finally arrives on the PlayStation Store! Guide special agent Leon Kennedy on his quest to rescue the president’s daughter as a village of infected attack you from all sides! Download today and receive 5 free Resident Evil 4 avatars as an added bonus (offer valid until October 4, 2011).
ESRB rated M
File size 3.25 GB

Cubixx ($9.99)
Cubixx HD is a fast paced action puzzle game which sends high scoring, combo chasing gameplay to the third dimension! Play through the epic 50 level arcade mode, challenge your skills to the limit in 50 challenges or take on the world in over 150 online leaderboards! If that isn’t enough you can join forces with friends in the 7 player co-op or destroy each other in the 7 player Deathmatch!
ESRB rated E
File size 164 MB

Saints Row 2 ($19.99)
Fifteen years have passed since your former Saints crew betrayed you. As you awake from a coma, you find the Stilwater you once ruled is in disarray. Unfamiliar gangs have laid claim to your territory, rival factions have taken over your rackets, and cash-hungry corporations have laid waste to your once proud 3rd Street home. Now is the time to seek revenge against rivals to reestablish your crew as the rightful kings of Stilwater.
ESRB rated M
File size 7 GB

Burnout Crash! ($9.99)
Criterion Games brings back the much loved Crash Mode in the latest installment of the award winning Burnout franchise! Go on the wildest Road Trip of your life; causing huge pile-ups, blowing up buildings and unleashing disastrous Super Features! Use Autolog to compete with and challenge your friends! Anyone can crash, but can you do it in style?
ESRB rated E10+
File size 1.03 GB

Altered Beast ($4.99)
“Rise from your grave!” When Zeus, the legendary Greek god, brings you back to life with those famous words, you set forth on a mission to rescue his daughter, Athena, from the wicked God of the Underworld, Hades. Using the Spirit Balls, transform into Werewolf, Weredragon, Werebear, Weretiger, and the ultimate form, the Golden Werewolf. Each creature possesses powerful attacks that are required to bring an end to Hade’s scheme.
ESRB rated E10+
File size 35 MB

NBA 2K12
The NBA 2K franchise is back & bigger than ever, delivering more action than any NBA game to date. This highly anticipated NBA 2K12 demo features a re-match of the 2011 NBA Finals, Heat vs. Mavericks. In the full version, fans can finally END THE DEBATE as to who the best teams and players of all time are with the NEW NBA’s Greatest mode featuring Michael Jordan, Magic Johnson, Larry Bird & more.
ESRB rated E
File size 1.21 GB

Burnout Crash!
Criterion Games brings back the much loved Crash Mode in the latest installment of the award winning Burnout franchise! Go on the wildest Road Trip of your life; causing huge pile-ups, blowing up buildings and unleashing disastrous Super Features! Use Autolog to compete with and challenge your friends! Anyone can crash, but can you do it in style?
ESRB rated E10+
File size 1.03 GB

Fallout: New Vegas – Lonesome Road ($9.99)
In Lonesome Road you are contacted by the original Courier Six. He promises to answer why he refused to deliver the Platinum Chip–but only if you make one last journey into the canyons of the Divide. Bring all your gear and weapons but leave your companions behind…this is one road you must walk alone.
File size 658 MB

Street Fighter III: Third Strike Online Edition Unlock Gill ($0.99)
This content allows you to play as Gill, the self-proclaimed god, without beating the game with every character.
File size 100 KB

Skydrift: Extreme Fighters Premium Airplane Pack ($1.49)
Experience the next level of speed and power. The three most powerful and deadliest planes of SkyDrift are ready for take off.
File size 114 KB

The Baconing – Roesha ($0.99)
Roesha is a 70’s era inspired police woman with a nasty attitude and an over-sized pistol that gets results! When her gun is simply not enough she calls on her electric disco ball to take down a big crowd. She can also fire First Aid shells at DeathSpank to heal her crime-fighting partner. And when she taunts, get ready for a Charlie’s Angel inspired pose and some Roesha attitude.
File size 2.12 MB

Qore Episode 40: September 2011
In September’s Episode 40 of Qore, Presented by the PlayStation Network Veronica Belmont gets busy with the co-op in Ratchet and Clank: All 4 One, interviews Amy Hennig the creative director behind UNCHARTED 3: Drake’s Deception’s epic story, previews two great classics remastered in HD as the Ico and Shadow of the Colossus Collection, and uses her head against the demons of NeverDead.
File size 1.38 GB

Ratchet & Clank: All 4 One Weapon Series 1

Ratchet & Clank: All 4 One Weapon Series 2

Shin Megami Tensei: Persona 2: Innocent Sin Digital ($39.99)
Rumor becomes reality… In Sumaru City, strange things are afoot, and idle gossip is having a concrete effect on reality. The mysterious Joker seems to be at the center of it all, but to what end? Delve into the web of rumors slowly encompassing the city before the madness becomes irreversible.
ESRB rated T
File size 906 MB

Edge ($4.99)
Develop your telekinetic strength by pushing a Cube within a geometric universe. Platforms, enigmas and reflexes combine to make Edge a rich and very comprehensive game.
File size 21.5 MB