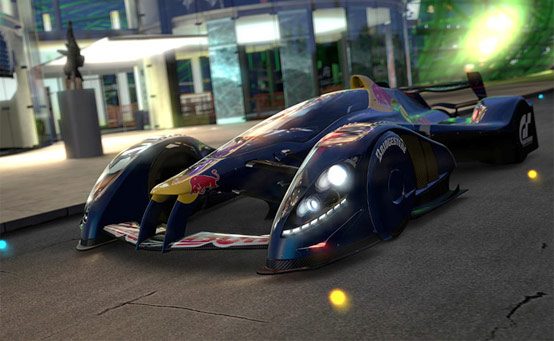 After revealing last week all of the great free content coming to Gran Turismo 5, which dropped to $39.99 as of last week, I’m happy to report that the Spec 2.0 update is now live for everyone to download and explore. And if you’re a PlayStation Plus member and have Automatic Downloads enabled, the next time you turn on your PS3 you might find that the update has already been installed. Otherwise, you can launch the game now and update GT5 to Spec 2.0.

The Spec 2.0 update enables you enjoy a new and improved GT5, including interior views for all standard cars, improved physics and AI, faster menus and load times, additional functionality and control in the online racing mode, updated 2011 NASCAR cars, a gorgeous new opening cinematic movie, and much more.

I mentioned last week that we also have a slew of downloadable content releasing on the PlayStation Store. Here’s an update on the content you can expect next week on October 18th.

The Course Pack ($4.99), will include two courses completely new to Gran Turismo. The first course is the world-famous Circuit de Spa-Francorchamps located in Spa, Belgium. At 7km long, this course is widely known as one of the most challenging race courses in the world due to its many twists and turns and elevation changes. And every inch of the track has been painstakingly recreated as only Polyphony can.

The second course is a flashy indoor karting arena designed by Polyphony Digital, and comes with two layouts to race. Lit with neon lighting, the kart arena not only showcases the beauty of GT5’s graphics and lighting engines, but also adds a crazy twist to the outdoor karting areas that shipped with GT5.

The Racing Car Pack ($7.99) adds 11 custom PDI-designed custom touring editions of fan favorites like the Mazda RX-7, Subaru Impreza, Mitsubishi Lancer Evo X, Dodge Challenger SRT8, Nissan GT-R, Honda CR-Z, and even a race tuned Toyota Prius, among others. The pack also includes three new racing karts. But what makes the Racing Car Pack really cool is that it also features the never-before-seen Red Bull X2011 Prototype vehicle. The Red Bull X2010, a machine built for pure speed, was the ultimate prize in Gran Turismo 5, and the Red Bull X2011 Prototype is the next evolution in design. In other words, that’s 15 new vehicles to add to your collection and master.

Also available will be the Racing Gear Pack ($2.99), which features 90 pieces of racing gear, including racing suits and helmets, for your in-game drivers. Included are GT original design helmets and suits, white and black Alpinestars suits, the official 2010 and 2011 season racing suits and helmets of 4 top NASCAR drivers, and racing gear of 4 other celebrity race car drivers including Sebastien Loeb and Peter Solberg.

And last but not least is the Paint Pack ($1.99), featuring 100 paint colors to customize your cars with. The pack includes new shades of matte, chrome and aluminum colors. It’s time to breathe some new life into your car collection.

While you can buy individual DLC packs, you can also buy it all at once as a bundle for just $11.99. PlayStation Plus subscribers will also get a nice discount on the bundle for the first month of release – more details on that soon.

And if you haven’t heard, this week is your chance to grab the Red Bull X2010, Sebastian Vettel model, which we are giving away for free this week to commemorate Vettel’s historic F1 championship win over the weekend. The Red Bull X2010 is a racing machine built for pure speed (up to 280mph, 0-60 in 1.4 seconds), built as a special partnership between Polyphony Digital and Red Bull Racing. If you haven’t completed all of the in-game challenges to unlock it in the game on your own yet, this is your chance to add this speed demon to your collection. See here for instructions on how to add it to your garage. This promotion is good this week only, so be sure to grab it before time runs out!

Finally, don’t forget to watch GT Academy Tuesdays on SPEED, and download full episodes from the Video Store side of PSN. Episode 4 debuts tonight at 7:00pm PST on SPEED and will be available this week on PSN, with the thrilling final episode premiering next week.