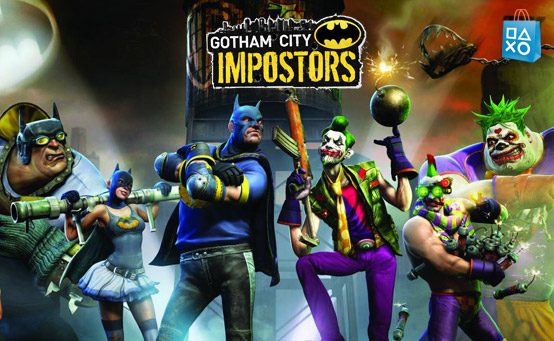 With great new PSN Games, the return of two PlayStation legends, great new PS3 Full Games and a stellar February kick-off for PlayStation Plus subscribers; there’s a lot to love with today’s update.

New PSN Games hitting this week include Gotham City Impostors. Bringing a new style of multiplayer mayhem with a tongue-in-cheek Gotham City style, you’ll want to see what the players in the Beta have been raving about. In addition, side-scrolling action comes in two flavors this week. For brutal combat action, you’ll want to check out Shank 2. For classic four-player co-op beat em ‘ups, download The Simpsons Arcade Game.

It’s also a big week for PlayStation legends Jak and Daxter. Not one, not two, but three of their original adventures are hitting the PlayStation Store today! And the best part? These classic PlayStation 2 games have been remastered in HD along with stereoscopic 3D functionality and new Trophy support! Jak and Daxter: The Precursor Legacy, Jak II and Jak 3 are now available individually, or grab them as a bundle at a lower price.

As mentioned earlier today, brand-new DLC is hitting UNCHARTED 3: Drake’s Deception including the Fort Co-Op Adventure. This DLC will mark the first time in the series you’ll be able to play co-op as the UNCHARTED villains with Zoran Lazarević, Eddy Raja, Harry Flynn joining forces in a tale that further explores the mystery behind the Janus head statue from the on-disc co-op adventure. It, as well as additional DLC, arrives today and is available individually, or as part of Fortune Hunters’ Club.

New PS3 Full Games arriving today include the twisted puzzle tale Catherine, as well as the fun for all ages Top Spin 4 and Lego Pirates Of The Caribbean. These titles represent some of the best experiences previously only found at retail; now available to download. PlayStation Plus subscribers are also able to download a free one hour trial of Catherine and Lego Pirates Of The Caribbean as part of their subscription.

Speaking of PlayStation Plus, today kicks off February’s month of free games, discounts, and exclusives. For one, the aforementioned The Simpsons Arcade Game is now free for subscribers! Recent PS one Classic release Final Fantasy V is also free to download. First and free access to this episode’s Qore, as well as free downloads of PS minis Hungry Giraffe and Gold Medalist round out this week’s Plus updates, with more fun to come throughout the month.

Finally, we’re all excited about the premiere of The Tester Season 3! New episodes are available to watch every Tuesday right here or download them from the PlayStation Store. Tune in to find out who the winner will be as they’ll be joining the legendary Santa Monica Studios team.

That’s all for this week. Check out the full details of this week’s update below, and let us know your thoughts in the comments below or join the discussion on the PlayStation Community forums in the Official PlayStation Store Update thread.

Shank  2 ($9.99)
The ex-mob hitman is back in action with Shank 2. With the updated arsenal of weapons and combat system, Shank 2 raises the bar from its original.
ESRB rated M
File size 1.23 GB

The  Simpsons Arcade  Game ($9.99) Free for PlayStation Plus Subscribers
The long-awaited home console port of the classic Simpsons arcade game is finally here! Join three of your friends as you chase down Smithers and Mr. Burns on the epic quest to save Maggie. Battle your way through 8 classic Springfield locations in this hilarious blast from the past!
ESRB rated E10+
File size 21 MB

Gotham  City  Impostors ($14.99)
A 6 vs. 6 first person shooter, Gotham City Impostors is a multiplayer game unlike any other, giving players the opportunity to rebel against conformity as they customize their own characters.
ESRB rated T
File size 1.64 GB

Top  Spin  4 ($29.99)
Top Spin 4 redefines the way you experience tennis. With the deepest player roster to date featuring 2K’s Signature Style and an enhanced Player Creator with a new My Player career mode, do you have what it takes to become #1 in the world?
ESRB rated E
File size 4.8 GB

Catherine ($39.99)
Explore the pleasures and horrors of love as Vincent, a man with a hard choice to make: marry his longtime girlfriend Katherine or move on to the incredible blonde he just woke up next to—named Catherine! But beware! Make the wrong choice, and you could end up dead.
ESRB rated M
File size 9.3 GB

Cubixx HD Demo
Cubixx HD is a fast paced action puzzle game which sends high scoring, combo chasing gameplay to the third dimension! Play through the epic 50 level arcade mode, challenge your skills to the limit in 50 challenges or take on the world in over 150 online leaderboards! If that isn’t enough you can join forces with friends in the 7 player co-op or destroy each other in the 7 player Deathmatch!
ESRB rated E
File size 164 MB

Kingdoms Of Amalur: Reckoning House Of Valor (Online Pass Paid) ($9.99)
The Grand Champion Tyr Magnus challenges you to compete in the Valor Arena. Enter the tournament grounds of the House of Valor in Kingdoms of Amalur: Reckoning. Overcome all obstacles to survive this barbaric tournament and seize control of the arena.
File size 35 MB

The King Of Fighters XIII Unlock Gallery ($2.99)
The entire artwork in the Visual section of the Gallery is available to purchase. *These art pieces can also be unlocked by playing the game.With the triumphant return of fan favorite characters like Mai, K’, and Vice, extensive refinement of the core fighting engine based on community feedback, and vastly improved network functionality, THE KING OF FIGHTERS XIII represents the HD entry in the series that fans have been waiting for.
File size 6 KB

Final Fantasy XIII-­‐2 – Opponent: Lightning & Amodar ($2.99)
Face Lightning and Lieutenant Amodar in the Coliseum! Use the crystals of defeated foes to summon them as allies in battle.
File size 18 MB

Warlords: How To Play Trailer Part 1

Warlords: How To Play Trailer Part 2

SSX: This Is SSX Trailer