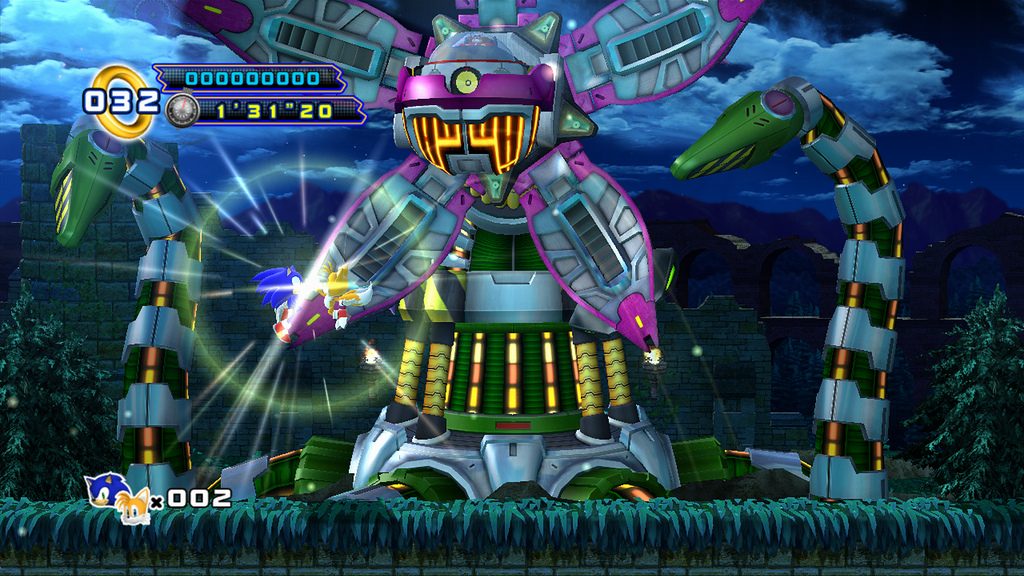 As you’re no doubt aware, Sonic 4 Episode II will be upon us in due course. I’m just here to give an overview of one of the features we’re most proud of in the upcoming game – Collaborative Gameplay between Sonic and Tails. Sonic can now team up at any point in the game with Tails, by utilising one of three combo moves in order to progress through some of the more challenging parts of a level.

Firstly, we have the Copter Combo (fans of the earlier Sonic titles will remember this from Sonic 3 and Sonic & Knuckles) which allows players to take control of Tails to lift Sonic up and over objects or onto previously unobtainable platforms.

Secondly, the Submarine Combo allows players to overcome Sonic’s big weakness, his inability to swim. Tails can now pick up Sonic and swim through the water scuba style, meaning that Sonic now has a way to speed through the underwater parts of a level. Meaning that whilst you still need to collect those all-important air bubbles to stay alive, you’re in much less of a hurry thanks to Tails support.

Finally, the Rolling Combo combines Sonic and Tails into a giant spin dash increasing their speed and giving the opportunity to unleash some devastation on opponents, and the environment, alike. This can be used to mow down even the biggest enemies, knock down large objects and even plough through snowdrifts.

This is available in both the single player adventure, where players control Sonic and only control Tails when in the combination moves, but also in two-player mode (both online and local) where a player controls each character and they share combination move duties.

In addition to this there’s also going to be other opportunities for collaborative play in the game – but we are not allowed to talk about them just yet!

Furthermore Episode II features a brand new graphics and physics engine so the game looks better than ever and Sonic feels like he did in the days of the Mega Drive.

The game is going to be hitting PlayStation Store later in the spring so look out for upcoming updates where we might reveal new stuff for the future.