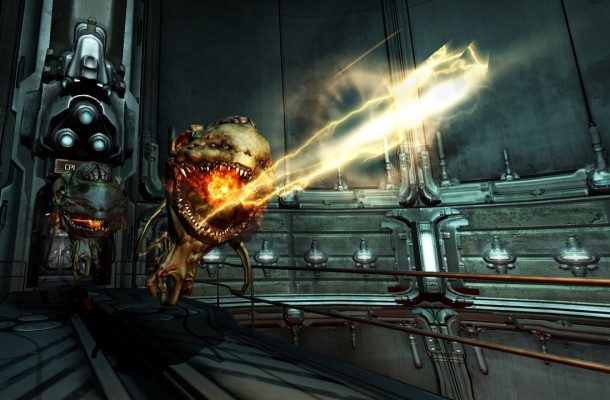 Doom 3: BFG Edition is set to launch on PS3 in October of 2012, bringing with it the first two games in the iconic series. It means you’ll be able to play the entire Doom series on PS3 for the first time and see for yourself why many consider these games to be some of the most influential shooters of all time.

We caught up with Eric Webb, producer from game developer id Software, at E3 2012 to talk about how the game has been buffed up for PS3.

PlayStation.Blog: How do you think all three games stand up today on PS3?

Eric Webb, Producer, Doom 3: BFG Edition: I think they all stand up really well. One of the first things we did when we first started work on it was pay attention to how the controls feel. There’s something about the DualShock 3 controller and its dual analog sticks that feels really good when you’re holding it in a game like this. It gives it a different life and almost makes it an entirely new experience. So I think it’s really cool on PS3.

PSB: What does stereoscopic 3D bring to the game?

EW: We were really surprised when we first had a look at it in 3D. John [Carmack, co-creator of the Doom series] went through quite a few different iterations of the game to help us figure out how best to fit the technology in. Just like adding DualShock 3 controls to the original Doom, 3D really brings Doom 3 to life. It’s interesting when you’re playing; you almost lose all of your peripheral vision and get sucked into the experience. I’d go so far as to say it’s the best implementation of stereoscopic 3D I’ve seen in a game so far. It really does draw you in.

PSB: Did you ever talk about PlayStation Move functionality?

EW: No. We didn’t really want to touch the core mechanics of the game. PlayStation Move is really cool technology but we’d have had to fundamentally change how the game works and we wanted to keep it as close to the classic experience as we could.

PSB: How about the first two games – was anything tweaked there for PS3?

EW: They are pretty much straight ports, but I will say that they run really fast at 60 frames per second, even with four-player split screen play going on. If you’ve got a big TV that’s really going to stand out. The guys basically wrote it from scratch to get it working on PS3.

PSB: What would you say attracts players to Doom 3 over games like UNCHARTED and the Call of Duty series?

EW: Working in the art department back when we made the original the version of Doom 3, one of the things that I’m really proud of personally is the fact that id Software was one of the first studios to bring in a film animator to add that movie aesthetic to games. I think we see other games coming out that are maybe a little bit derivative of that kind of thing – people are co-operating now between film and games and bringing that same type of look to it.

I think the game feels fresh. It was very modern and very aggressive, and you had to have a very high end PC to run it back in the day whereas now it’s running happily on PS3 in 720p high resolution. It’s really the best conversion we could have done for the game, I’m confident to say. It has good gameplay, good art, good style. It just lasts.

PSB: So there’s the addition of the mounted flashlight to the game. Has anything else been modified for PS3?

EW: We’re making textural improvements to the characters and demons. We’ve completely rewritten the network code so that multiplayer is a better experience. In addition there’s also the Lost Mission Pack, containing seven new levels. They pick up from a certain part of the story line in the main game – without giving too much away, it’ll all make sense when you play it. You’re a different guy in a different part of the base but it’s the same world.

PSB: The Doom games are the formative experience for many shooter fans. What’s been the reaction to this version?

EW: We’ve been incredibly surprised with the feedback from the show floor. Doom is obviously very important to us and we feel very passionate about it, but you never really know until you bring it to an event like E3 what the reaction is going to be. We were convinced it was a good idea to rework the game like this, and it was great that John [Carmack] was so passionate about the 3D stuff – because that added some new tech and got the team’s creative engine running again, so to speak – but you just never know. So the response has been really humbling.

It’s funny. You start to hear really interesting stories about people’s first experiences with the games. The first time I played the original Doom, my dad brought it home on a floppy disc. That told me two things: first, my dad was cooler than me at that point; second, I didn’t know how they were doing it but I had to get involved with it.

PSB: Much of the team who worked on the futuristic shooter, Rage, contributed to this. What do you think they brought to Doom 3: BFG Edition?

EW: Those guys learned a lot of lessons about how to work with AI and craft it into something really believable. When they came across to work on Doom 3: BFG Edition they had this incredible toolkit at their disposal, and they could focus more on making the experience great as opposed to fighting the technical hurdles on the way to finishing the game.

PSB: How do you balance staying true to the original game with making improvements?

EW: Your first inclination is to make big sweeping changes because it’s something that you’ve looked at for a long time, so it doesn’t feel fresh anymore. We’ve really focused on keeping the core experience there. From talking to people on the show floor, a lot of them weren’t too happy with the idea of the flashlight as something separate. So integrating the flashlight into your main weapon seemed like a no-brainer, yet even then we still had people say they wanted to play the original way.

Another piece of feedback we had was that the game was too dark, so we’ve lit it some more here and there and tried to lead the player’s eye a little more. So there’ll be two modes – the original, unchanged version of Doom 3 and the updated one.

PSB: And trophy support must have been a fun feature to implement…

EW: Yeah, we sat down with the design team and really just let them riff. It was a little tricky adding trophies to a game that’s so well established, but I think fans will be impressed.