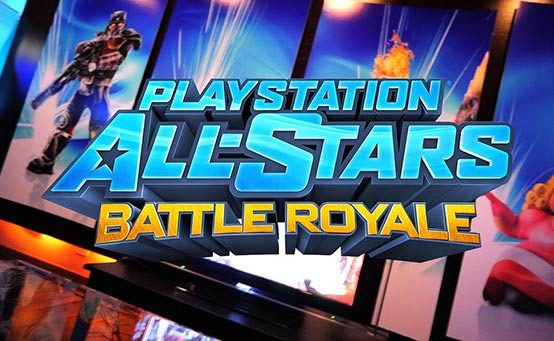 It’s that time of year again — Comic-Con International 2012, and we’re here to give you an early look at everything PlayStation this year.

Throughout Comic-Con, the PlayStation booth will be offering demos of the latest content from our upcoming titles for PlayStation 3 and PlayStation Vita. Come over and check out PlayStation All-Stars: Battle Royale (and make sure to pay attention at the panel for the game on Sunday, where two new combatants will be revealed!), Sports Champions 2, The Unfinished Swan, LittleBigPlanet Karting, Sly Cooper: Thieves in Time, Papo Y Yo, Counter-Strike: Global Offensive, and The Expendables 2. Attendees will also be treated to hands-on opportunities with new and upcoming PlayStation Vita titles like Sound Shapes, Retro City Rampage, LittleBigPlanet, Jet Set Radio, Guacamelee, Gravity Rush, Ragnarok Odyssey, and Sly Cooper: Thieves in Time. There will also be chances to check out cross-play features for PlayStation All-Stars: Battle Royale and Street Fighter X Tekken.

A limited number of The Last of Us shirts also will be given out at the PlayStation booth throughout the week. Stay tuned for details on dates and times as we get closer to the show.

For anyone unable to get hands-on with PlayStation All-Stars: Battle Royale at our booth, we will also have two gaming stations featured in the SPIKE TV booth (BOOTH#3729) for another shot to get your hands on one of the most exciting new upcoming PS3 games.

Excited for Comic-Con yet? Well, hang tight, there’s more. Below is a full schedule of our panel sessions that will be taking place for some of our highly anticipated titles, including Beyond: Two Souls, The Last of Us and PlayStation All-Stars: Battle Royale.

Meet David Cage, the co-CEO of Quantic Dream and writer/director of the 2010 hit Heavy Rain, as he discusses his latest project — Beyond: Two Souls. David will focus on the concept of creating innovative gameplay experiences that are woven together with emotion and story. Beyond: Two Souls is prepared to deliver an immersive interactive and cinematic experience based on emotional involvement and interactive storytelling. In developing a unique “interactive drama” to engross the audience, David and his team have introduced the concept of Virtual Performance Capture to videogames, where actors play the entire role in development of the game (from motion capture to dialogue). The session will focus on techniques used to create an emotional and compelling experience, focusing on their award winning titles as well as provide a deeper look into their brand new project, Beyond: Two Souls. Join IGN.com‘s Greg Miller as he moderates with writer/director and co-CEO of Quantic Dream David Cage, and actress and academy award nominee Ellen Page as they explore the uncanny valley of bringing realism and emotion to this project.

Join Creative Director Neil Druckmann and Game Director Bruce Straley of Naughty Dog, along with actors Troy Baker (Fullmetal Alchemist, Batman: Arkham City) and Ashley Johnson (Marvel’s The Avengers, The Killing, Ben-10: Alien Force) in a discussion about the upcoming post-pandemic, survival-action PlayStation 3 game The Last of Us, from the developers of the critically-acclaimed UNCHARTED series. Panelists will provide an exclusive reveal of a new in-game cinematic featuring a special guest in this Q&A session moderated by Adam Sessler (veteran videogame industry journalist). Guests will also receive a limited edition The Last of Us poster.

Saturday, July 14 (11am to 12pm) – Room 7AB
The Unfinished Swan
An Art-Infused Adventure: Giant Sparrow Talks Art and the Inspiration Behind One of the Most Unique and Anticipated PlayStation 3 Titles

The Unfinished Swan presents an art game like no other before it. For many years, a debate has raged over whether or not videogames can be considered art. In 2012, The Unfinished Swan will address the issue head on, both in terms of its experimental nature and its focus on the art of painting. Attendees will have the opportunity to get an up-close look at the art within the game, discuss games as art, and chat with Giant Sparrow about the creative inspiration behind developing one of the most beautiful and intriguing games on the PlayStation 3.

Chan Park, President of SuperBot Entertainment, provides a look into the creation and development of PlayStation All-Stars: Battle Royale, where the team has tapped into 17 years of PlayStation history to create a brawler with top PlayStation characters and environments. Learn about decisions faced in selecting characters, how the team implemented the idea of mash-ups, and how players can engage in cross play to challenge one another, regardless of whether they’re playing on PS3 or PS Vita. The team will also unveil the two newest characters in the series at the panel. Q&A session to follow. IGN.com’s Greg Miller will moderate a panel featuring Chan Park, President of SuperBot Games and Omar Kendall, Game Director of PlayStation All-Stars: Battle Royale.

Looking to become a professional race car driver and the next GT Academy winner? Phase 1 of the GT Academy National Finals is coming to Comic-Con!

This year’s GT Academy National Finals will be taking place on Friday and Saturday, July 13 and 14, at Jolt’n Joe’s in the Gaslamp Quarter, a short distance away from the San Diego Convention Center. The nation’s top 32 drivers will take part in a live head-to-head competition, battling it out for the opportunity to move on to the next phase and get one step closer to becoming the winner of Season 2’s GT Academy.

NEW TWIST ADDED: This year, everyone at Comic-Con has a chance to secure a spot in the National Final. This “wildcard” will compete with the 32 finalists, fighting for the chance to move on to the final phase of the competition. Anyone (pending eligibility) can register at the Oasis Bar inside the Hard Rock Hotel in downtown San Diego on Thursday, July 12th from 10am to 4pm Pacific time and compete for top lap time in Gran Turismo 5. The top competitor of the day will walk away with a one-of-a-kind GT Academy 2012-designed HumanRacing® GT Chassis equipped with the Thrustmaster T500RS wheel and pedal set. Additionally, the winner will earn a 33rd spot in the Finals competition, becoming “Racer X” and earning a chance Friday morning July 13th to knock out and replace any of the top 32 finalists.
So for those who didn’t make the top 32 within the online competition, this is your second chance to fight for a spot in the National Finals! Just be sure to show up early as the competition will be first come first serve, and will only be running from 10am to 4pm.

Once within the National Finals Event, the 33 contestants will be divided into individual groups and race in a series of live head-to-head races in Gran Turismo 5. Racing Nissan vehicles, each contestant will earn points based on the place they finish in. As race difficulty increases, the contestants with the fewest points at the end of each round will be eliminated until only 16 remain. These final 16 contestants will move on to Phase Two in GT Academy, taking the racers away from their PS3 consoles and onto the track, behind the wheel of real race cars, for a chance to become a professional race car driver and the official GT Academy winner for the U.S. The winner will have the opportunity to train with an elite racing team and will work towards a debut as part of a professional team. The competitors’ road to victory will be documented in an innovative new series airing exclusively on Spike TV in late 2012.