Behind the Classics: MediEvil 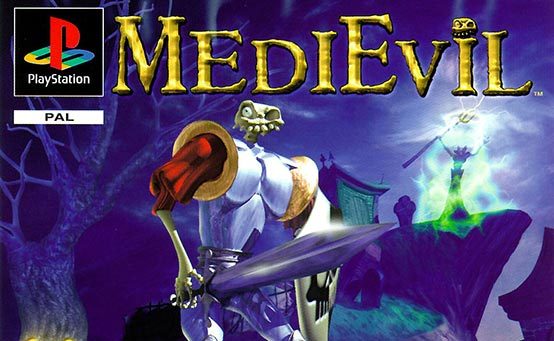 The second entry in our Behind the Classics series is a real lost gem – SCE Cambridge Studios’ wild, wacky supernatural adventure MediEvil. First released on PSone back in 1998, it put you in the shoes of Sir Daniel Fortesque – an undead knight unwittingly reanimated by the evil sorcerer Zarok who embarks on a quest to liberate the kingdom of Gallowmere.

A sequel followed in 2000, with a PSP remake also popping up on PSP in 2005, however, it’s the original game that remains most embedded in the memory. With Sir Dan soon to enjoy a comeback of sorts as a playable character in PlayStation All Stars Battle Royale, we sat down with original designer Chris Sorrell to find out more about the game’s development.

PlayStation.Blog: What was the original concept for the game? Did you draw inspiration from anywhere in particular for the game’s look and feel?
Chris Sorrell, Game Designer, MediEvil: The first design proposal for the game had the working title ‘Dead Man Dan’ and described a game that was a fusion of Capcom’s Ghouls’n Ghosts with the art style of Tim Burton – especially the look and feel of The Nightmare Before Christmas. In both cases these were things that I was a huge fan of back in the mid ‘90s. Lead artist Jason Wilson shared my interest in dark, gothic influenced artwork and we worked together to define the look and feel of the game.

PSB: It was an ambitious title for its time – what were your biggest challenges in realising that original vision?
CS: MediEvil presented a real mountain of challenges. The game started life as a project of a small, cash-strapped independent developer – Millennium Interactive. In addition to bringing together a brand new team – none of whom had really made a 3D game of this scale before – we were in ‘sell’ mode almost from day one, with the future of the studio riding on our ability to attract a major publishing deal as quickly as possible. We were initially working on multiple platforms including Windows and Sega Saturn as well as PlayStation before we finally had the chance to demo the game for Sony. Thankfully that was probably our best pitch ever: SCEE had some really inspiring people in management, they loved MediEvil, and within a few weeks we were signed to make an exclusive PlayStation game. In a few more months we became Sony’s second studio in the UK.

Of course another layer of challenge came from the fact that, like most other developers at that time, we were still feeling our way with 3D. Things like camera and character control presented a lot of interesting new challenges and required us to try out a number of approaches before we settled on solutions that seemed to work.

PSB: How close to your original concept was the finished game?
CS: Actually really close. Over the course of development the game became less arcadey and a little more of an adventure – which, being a huge Zelda fan, I was very pleased about. As for the game’s look, I think that was extremely true to our initial goals as you can see if you track down some of the concept art that’s out there on the internet.

PSB: Which element of the game are you most proud of, and which element, if any, do you feel fell short?
CS: At the time I might have said I was most proud of how our team pulled together to finish the game without compromising on the quirky attention to detail or scope of the game. Looking back now, I guess I feel most proud of the fact that we managed to create a game which – and I believe this is down to the game’s personality and charm – a lot of people still seem to remember. As a developer, it’s a real privilege to be told that your game brings back fond childhood memories for someone and that seems to happen quite often with MediEvil.

Where do I feel we fell short? Well I would have liked to travel a little further down that ‘Zelda’ path – I think a genuine, deep adventure set in the MediEvil world could have been something quite special. The game was also supposed to feature Morten the Earthworm – who lived in Dan’s empty eye socket. Alas, he didn’t make the cut.

PSB: What do you see as the game’s legacy? How would you like it remembered?
CS: Certainly I think we were one of the first games to capture that Tim Burton vibe and I think there may have been a few spooky themed action games that followed MediEvil where the developers probably looked at what we had done. [2002 Capcom fantasy adventure] Maximo springs to mind. I’d be quite happy if people remembered MediEvil as ‘that game with the weird, grunting skeleton dude with one eye and no lower jaw who throws his own arm like a boomerang’.

PSB: A PSP version came out in 2005, but the series has been largely dormant since. Do you ever think about where you might have taken the franchise?
CS: I’d certainly love to work with Sir Dan one more time and I have lots of ideas that I think would make for a great new MediEvil game. Sadly I think it’s an unlikely prospect since I no longer work for Sony, not to mention how times have changed in the years since Dan first left his crypt.

More Behind the Classics