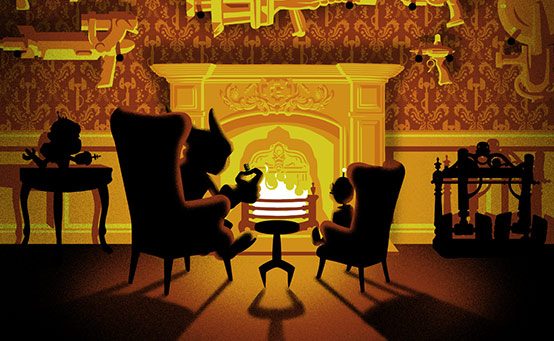 At Insomniac, we’re big fans of some of amazing artists out there creating incredible screen-printed posters for movies and games. Being able to work with Olly Moss on the cover for Resistance 3 was a highlight for all of us here.

For Ratchet & Clank’s 10th Anniversary, we wanted to work with some more of our favorite artists to create amazing, limited-edition screen-print posters celebrating everyone’s favorite Lombax and his robot companion. (If you’re curious about how screen-printing works, this video is informative.)

We partnered with our friends and collaborators iam8bit to create this highly limited edition series of posters. Each poster will be coming from a different artist, and will be hand-screened here in Los Angeles. And each one is a single-print run – so when it’s gone, it’s gone!

These will never be produced again! Seriously!

Today we’re excited to reveal the first print, along with all of the pertinent details, including where you can get your hands on it. For this print, we worked with another one of our favorite British artists, Aled Lewis, who you may know from his work with iam8bit, Threadless, TeeFury and Mondo.

In addition, the prints are being hand-made by rock poster legends, Two Rabbits Studios, in their downtown Los Angeles warehouse.

On sale Wednesday, October 24th at the iam8bit store around 9:00am Pacific time. Check the iam8bit Facebook for updates.

We asked Aled for his take on the piece and his thoughts as he was creating it. Here’s what he said:

“Whenever we see Ratchet and Clank they are usually in the thick of the action or poised for adventure, so I thought it would be nice to see our heroes in a much lower gear; reflecting on their achievements over the last 10 years. There didn’t seem a more appropriate way to explore this than by showing a cross-section of the weapons and the gadgets that have defined the franchise and brought so much pleasure to fans of the game.

“There’s no way I could feature everyone’s favorite guns, but I tried to pick a bunch that represent each game and celebrate the variety and invention in the gameplay. I hope R&C fans get a kick out of the little details I’ve added!”

We hope you’re as excited as we are about this part of the Ratchet & Clank 10th Anniversary. Stay tuned to our Twitter feed and Facebook page for all the latest on the Anniversary as well as the upcoming Ratchet & Clank: Full Frontal Assault, and Ratchet: Deadlocked HD.