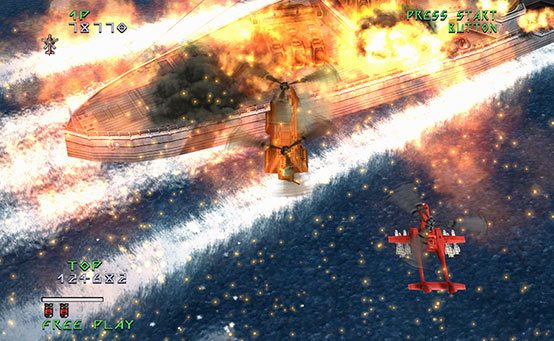 As a small Japanese developer specializing in a niche genre, it is a great pleasure to be able to release one of our games internationally. Under Defeat HD: Deluxe Edition will be our first PS3 / PlayStation Network title distributed outside of Japan, and our first international package release since WarTech: Senko no Ronde in 2007.

Old-school. Retro. While we do use those terms to describe the titles we develop, fundamentally we hope to make games that are of the same cloth as the classics we played and loved in our youth. Our studio was built on the concept of creating “game-like games” – drawing from the dynamics and style of past favorites. We have felt that the number of similar games on the market have dwindled, particularly in recent years.

Though we are a small team – and plans do not always go as we had hoped – our intentions to continue producing what we believe are “game-like games” has not changed.

The concept for the original arcade version of Under Defeat could be simplified to developing a realistic wartime shoot ’em up. At the time, the team that would become the core creators of Under Defeat was idle as they had just finished a previous project. The rest of the company was focused on Senko no Ronde, and though we considered having the team merge in with the others, I decided to give them time to think of designs for a new game instead.

The duo would initially conjure up plans that were not even in the same genre. Despite taking on characteristics of what some might describe as overly enthusiastic appreciation of historical weaponry, I thought that giving them the freedom to create what they want would encourage the team to really take control of the project; and, moreover, produce something that has yet to be made.

Earlier this year, in response to a large number of requests from domestic and overseas fans, we released the HD version of Under Defeat for current generation consoles in Japan. At the same time, we were in discussions with Rising Star Games to bring the title to the North American and European markets.

We had known Rising Star for carrying a good lineup of hardcore Japanese games and felt they would understand a 2D shooter like Under Defeat. More specifically, we believed they would appreciate and respect the core nature of the game. We certainly hope that the project will be successful and that we can build a continuing relationship with the publisher.

Since we set up shop in 2000, G.rev has maintained and championed the aforementioned policy in terms of approaching game development. And while we will continue to strive to create “game-like games,” times have changed and we must take on new challenges.

In a lot of ways, we have basically done what we pleased these past 12 years. Hopefully in the future, we will be able to show fans and gamers growth as a company. It would be nice to look back a few years down the road to see that we have made progress since the release of Under Defeat HD.

More than likely, however, we will probably still have some kind of hand in producing and making shoot ’em ups (LOL).