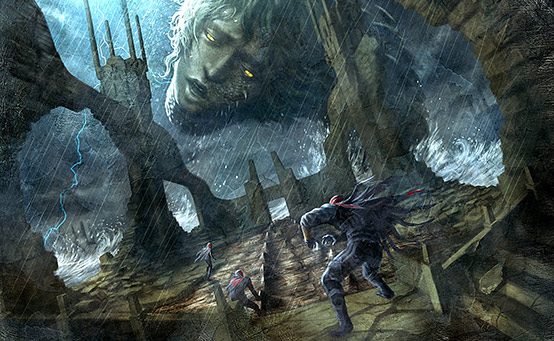 In my last post, I explained that monsters in the world of PS Vita’s Soul Sacrifice are what have become of humans who succumbed to darkness, using magic according to their desire. Today, I’m pleased to reveal a new monster, “Leviathan,” and to share its backstory.

Once upon a time, in a kingdom far away, there were two twin princes. The older twin excelled at everything, and the younger one failed at just as much. The two were so different that it was a wonder that the same blood flowed through their veins. It was like pairing up a giant and a dwarf. The younger brother grew up with a severe inferiority complex and developed an extremely dark personality. He started to enjoy collecting ferocious animals, one in particular being a crocodile from another kingdom. He put the crocodile in a cage, where he tormented it. It was the only time he could ever feel strong.

Years went by, and it was finally time for the heir to take the throne. Of course, the chosen heir was none other than the eldest of the twin brothers. Jealous, the younger prince stormed off to his room. He sat there, staring at his crocodile. “If only I could get the crocodile to kill my brother…” he thought. Just then a strange voice resonated in the room and the prince could feel his body drown in magic…

Live on in Ghost Mode

In addition to revealing this fearsome new monster, I’m excited to share a key new element to the game’s multiplayer experience: Ghost Mode. The co-op multiplayer mode of Soul Sacrifice is not just about playing offense or defense. You will use yourself and allies as a catalyst for magic, and truly battle together.

At times, you’ll use magic to stop time so your allies can attack. Other times, you can choose to help aid your dying friends with your healing power. There are many choices available to you, and your victory depends on your decisions. And it doesn’t end if you fall during a co-op battle. With Ghost Mode, you will become a “ghost” and continue to aid your allies. Players that have become ghosts are able to openly observe the statuses of the enemies and ally members. You can strengthen your team mates or make the enemies vulnerable by touching them on the screen. So even after you die, you can keep aiding your party and continue the co-op battle until the end with your friends.