Disgaea D2, Time and Eternity, The Guided Fate Paradox on PS3 This Year 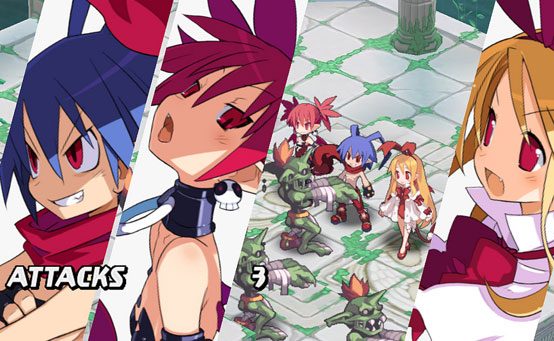 Greetings, doods! I hope you have all been doing well! I wanted to drop in to talk real quick about all the awesome new titles that were just announced at our annual press event! We have three brand-new PlayStation 3 exclusive titles lined up for release later this year for North America and Europe, so let’s jump right in!

I want to kick things off with our big announcement from this year’s press event! Coming this summer, NIS America will be publishing Time and Eternity in North America and Europe! Time and Eternity was developed by IMAGEEPOCH Inc. and licensed by NAMCO BANDAI Games, and is a very exciting title for us, as it is a brand-new style of RPG using hand-drawn animation! Time and Eternity places you in a serene kingdom where everyone is ready to celebrate the imminent marriage of their princess to a valiant knight. However, when a group of assassins appears during the ceremony, the glorious day is brought to a screeching halt as the knight is mortally wounded in the ambush. As a last resort, the princess reveals her long-hidden secret—there is a second soul living within her, and together, they have the power to travel through time. But can they act quickly enough to reverse the course of history and find out why their wedding ceremony was crashed? All shall be revealed this summer, dood! This title will feature dual audio voicing and DLC, as well!

Disgaea fans rejoice! Nippon Ichi Software Inc.’s Disgaea Dimension 2: A Brighter Darkness will be illuminating your lives this fall! This title is a direct sequel to the original Disgaea, starring the fan favorite characters Laharl, Etna, and Flonne! Story-wise, Laharl is back and has settled into his duties as a full-fledged Overlord. However, he isn’t getting the respect that he wants from the locals, so he sets off on a journey to get the respect he feels he is owed! Expect the same awesome Disgaea craziness, with new characters and old friends, and new demons ready to punchasize your face! Fans will definitely enjoy the new Master/Pupil system, where the player chooses the master and the pupil, as well as which skills to pass on! Benefits include new skills and higher weapon proficiencies for the pupil, while the master gets a stat boost for being a rad teacher! On top of that, character customization is back with a vengeance! It all will hit later this year for PS3 with dual audio voicing and a bunch of planned DLC!

Last but not least, we have another awesome PS3 exclusive title from Nippon Ichi Software, Inc. titled The Guided Fate Paradox! Some folks may remember that way back at the end of 2010, I came onto PS.Blog to talk about our rogue-like title Z.H.P.: Unlosing Ranger vs. Darkdeath Evilman for PSP. The Guided Fate Paradox is actually the spiritual successor to Z.H.P. – so rogue-like RPG fans across the world should rejoice!

The story for this title in particular is quite unique – imagine you are at the mall and you are forced to enter a raffle they are running inside… and you win! Congratulations, you winner, you! Your prize? You get to become God! Now that you are God, it’s your beeswax to go through the mysterious Fate Revolution Circuit and guide the fates of those who have prayed to God for help! You won’t be alone, though—you will also have a heavenly host of cute maid-angels and hot butler-angels to help.

“But wait,” you may shout shoutingly, “Ryan, go back to the rogue-like part!” Sure thing! This title takes the seemingly masochistic genre of rogue-like RPGs and makes it more approachable and fun for RPG greenhorns! Already a rogue-like veteran? Not to fret, as you’ll appreciate not only the awesome randomly generated dungeons, but also the insane combinations of items and gear you can use! Tank treads or a Prinny car for legs? Bat wings or robotic helmets? It’s all there, along with some over-the-top Disgaea-like special attacks. Also, look forward to customizing your character, equipping your angelic companions, and delving into dungeons so deep, you might end up on Hell’s doorstep! It’s coming this fall for PS3 with dual audio voicing!

That’s all for now, doods! We’ll be back in a few weeks to get everyone excited for the launch of Hyperdimension Neptunia Victory for PS3, which is set for later this month in North America and Europe! Thanks again for all your support, doods!