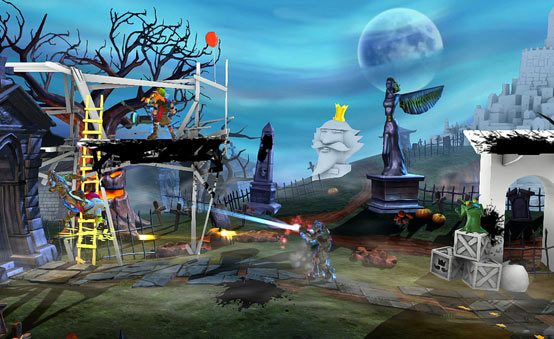 Just stopping by today with a quick reminder that Zeus and Isaac Clarke are live today for PlayStation All-Stars Battle Royale, along with our new stage “Graveyard”!

Graveyard mashes up MediEvil’s zombies, mausoleums, and gargoyles with elements from The Unfinished Swan, revealed via ink splats after a mid-game whiteout. It looks great and keeps the fighting honest, with a medium-width playfield and zombies that will earn you AP when destroyed.

Zeus plays as a legendary heavyweight, making each strike feel epic. He’s got limited range, but with the ability to power up every attack merely by holding down the button, he can crush a cowardly opponent’s guard and build AP faster than anyone. Many of his triangle lightning attacks are also excellent at catching multiple opponents for an even faster ride towards his truly Olympian level 3 super.

Isaac Clarke is at his best harassing opponents from mid-range, with a wide variety of projectiles powered up by his unique Stasis and Kinesis powers. He’s no slouch at close range either, with some mighty melee attacks and the short-range force gun, but he shines brightest harassing more distant opponents with the grenade launcher, bouncing bola, and his Plasma Cutter.

Both characters come with full single-player story modes, including intros, outros, and rival scenes, as well as exclusive unlockable minions, a second unlockable costume, and all the unique customizable taunts, themes, etc. you’ve come to expect.

In addition to today’s launch of Zeus and Isaac, we’ve also done a new balance patch, which modifies every existing character in some way (and fixes some pesky glitches), as well as adding some new bells and whistles to familiar items. The hardcore players can check out the details here in the official PlayStation All-Stars forums.

Isaac and Zeus both come free for anyone that purchased a retail copy of God of War: Ascension (it’ll be in your box as a pack-in code). For anyone else, you can pick them up on PSN for $4.99 each. The Graveyard stage is available for free in online ranked matches and is $1.99 to own it. Both of these new All-Stars add some very unique angles to the game. I’ll see you online.