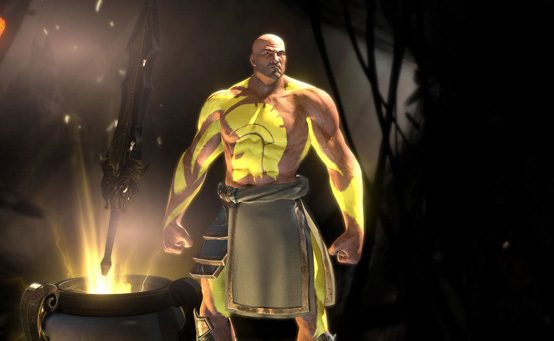 Champions! With God of War: Ascension out in the wild for two weeks now, we’re seeing our ever-growing community becoming a legion of champions in multiplayer and thousands conquering Kratos’ latest single-player journey. We’ve been listening to every bit of constructive feedback on our boards, Twitter, Facebook, here on PlayStation.Blog, and around the internet stratosphere. Rest assured that our development team at Sony Santa Monica is committed to supporting you.

FACTOID: Ares is the most popular God allegiance thus far, but also has players with the lowest overall skill rating. Hades is the second most popular, and the highest skill rated players, evil incarnate FTW!

We’re pleased to announce the release of our latest 1.03 update, deploying today. Though this update may be small, it throws an added support line at the Trial of Archimedes, and enhances multiplayer customization with a new appearance feature for your Champion – we call them “Marks”.

We received extensive feedback from the community that the “Trial of Archimedes” section (Chapter 28) near the end of the game was excessively challenging. In every God of War game, establishing a well-paced difficulty ramp towards the end of the game is paramount to us. Based on player response, the degree of challenge offered here was short of our goal of being perfectly balanced.

In the 1.03 update, at the end of each elevator stage (three total), players will now receive a measured amount of green health orbs and a nominal amount of blue magic orbs. This change affects all difficulty levels. We are confident this revision will address feedback regarding “Trial of Archimedes” while still preserving the level of challenge appropriate for this late section of the game.

Thank you for your understanding and patience. Good fortunes in your quest to conquer the Trial of Archimedes and complete Kratos’ ascension!

As noted, 1.03 also adds “Marks” for added customization to your Champion in multiplayer, and 8 additional new tints, including “Ash”. Now you have an opportunity to become a “Marked Warrior”. These are the six mark’s we’ve added in this update, with more to come:

Unfortunately, the time necessary to diagnose and explore audio issues cited by many of our fans during their play experiences made a solution in time for inclusion in the 1.03 update unfeasible. Despite this, we are still very aware of these reports, we continue to monitor user experiences in this regard, and we are working as quickly as possible to find a fix. We understand that this issue is of particular frustration for many of you in the community; your patience is greatly appreciated!

This is just the beginning of post-launch support for God of War: Ascension. As stated previously, we have an influx of DLC in the weeks ahead to support your strategic play-style, and an unannounced 4th weapon class. We’re also exploring other new enhancements we can’t disclose just yet, however you can try asking The Oracle (aka @SonySantaMonica) – you never know.

Now do well warrior, ascend! And stay in touch with everything God of War on our official site.