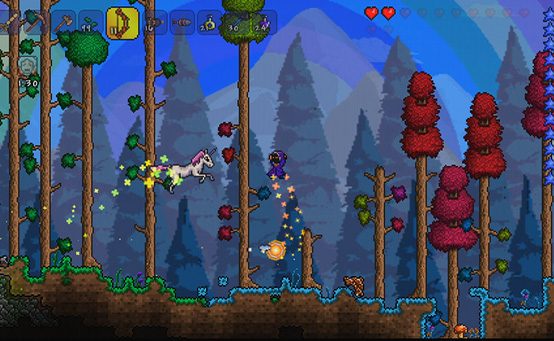 Your voices have been heard, and it’s my great pleasure to announce that after much discussion the teams at 505 Games, Engine Software, and Re-Logic have decided to continue our exciting journey together and bring Terraria to PS Vita! That’s right, folks – Terraria will be available to play anytime, anywhere. It’s almost like we never sleep!

Ever since we announced that Terraria was coming to PS3, we’ve been overwhelmed by requests for a Vita version. We’re tremendous fans of the PS Vita system, and with its touch controls, dual analog sticks, gorgeous display, and robust online features, it seemed like a natural fit. PS Vita is a great platform for digital games in particular, and we couldn’t be more excited to be a part of it.

For those who haven’t heard of Terraria, it’s a sandbox adventure in the style of our favorite “Metroidvania” games – an indie darling on PC that has gathered an impassioned community and sold over two million copies.

As a sandbox game, it has all the endless possibilities you’ve come to expect – you can build with dozens of blocks and craft hundreds of items – yet it’s unique in how easy it is to pick up and play because of its platformer controls and familiar 16-bit graphics.

The core of the game focuses on exploring the sprawling, randomly-generated worlds with their exotic biomes and deep underworlds, as well as slaying the hordes of monsters and evil bosses contained within. As you progress on your adventure you mine stronger ores with which to craft better weapons and armor, and collect magical treasures to help you become any type of hero you can imagine. Laser rifles, wands, potions, flamethrowers, shark launchers – Terraria has it all.

The true soul of the game shows in its multiplayer. Adventuring with (or fighting against) your friends in massive worlds is an absolute blast. Just like the PlayStation 3 version, Terraria on PS Vita will support up to eight simultaneous online players, along with competitive leaderboards and (extremely) challenging Trophies!

The joy of Terraria is in its sense of discovery – you never quite know what is around the next corner. The game plays great in both small chips or large chunks of time — again, perfect for PS Vita. One thing is for sure – you’ll soon be racking up hours upon hours of gameplay time. In Terraria, the world is your canvas, so make it your own!

More details will follow, so stay tuned for further announcements. And if you have any questions, let us know!