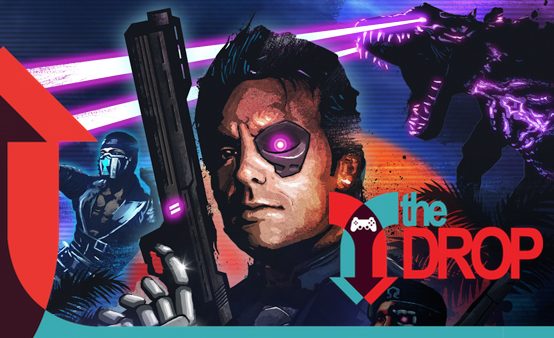 The year is 2007. It is the future. Earth has been ravaged by a nuclear war and new paths for peace must be found. A U.S. cyborg army may have found a solution: a powerful bioweapon on a distant island. A Mark IV Cyber Commando, Sergeant Rex Power Colt has been sent over to gather information and figure out what the hell is going on in Far Cry 3: Blood Dragon on PSN.

Developed by Frima Studio, the sequel to the 2009 PSN hit Zombie Tycoon, Brainhov’s Revenge steps up the hilarious, irreverent RTS gameplay of the original with an array of new zombies, sharper graphics and multiplayer Cross Play on PS3 and PS Vita. Enjoy this week’s The Drop.

Developed by Ubisoft Montreal, Far Cry 3 Blood Dragon lets players get the girl, kill the bad guys and save the world in a VHS-era vision of the future.

As Sergeant Rex Colt, you are part man, part machine, all American. You are a state-of-the art Mark IV cyber-commando on a mission…of vengeance. You’re out to bring down your old commanding officer and his battalion of ruthless killer cyborgs and you’ll stop at nothing to get the job done. Hollywood action icon Michael Biehn (The Terminator, Aliens, and The Abyss), returns in this explosive 1980s style sci-fi vision of a dark future. Turn off your VCR, plug in your video game cabinet, and get ready to experience all of the thrills of Far Cry 3 Blood Dragon.

(PS Vita and PS Vita Game Card) — Prepare yourself for a brutal combat experience where every decision made will have consequential results. Soul Sacrifice is a co-op action game full of brutal combat and consequential gameplay choices. Take on the role of a slave who stumbles upon a forbidden book that allows its readers to relive epic battles between sorcerers and monsters of the past. In order to use the magic during fierce battles, the player must be willing to make a sacrifice in exchange — ranging from personal belongings, a limb, or even a life. What price will you pay for power?

(PS3/PS Vita – Cross Buy) — Pick your side in the epic war between two evil masterminds: apprentice-gone-rogue Orville Tycoon and his army of heavy-duty zombies, or his vengeance-thirsty mentor Professor Brainhov and his frantic masses of agile undead! Post Z-day, Tycoon’s mad machination to extinguish all life in Finkleville has almost reached its apogee. During the final siege on the human fortress, his former mentor makes a sudden comeback, seeking retribution for his apprentice’s betrayal and eager to reclaim his rightful place as alpha mad scientist. Only one question remains: who shall win? Slow zombies, or fast zombies? Find out as undead armies clash in both the immersive single player campaign and the competitive multiplayer mode!

The multiplayer mode pits Brainhov and his fast, ravenous zombies against Tycoon and his army of shambling, slow zombies in a one versus one deathmatch. Pick a side and unleash your zombie hordes to destroy the mobile base commanded by your rival scientist. To achieve that, you will be given control of two packs of zombies and a powerful monster unit to gain control over various buildings, level up and ultimately face off in an epic battle!

Deadly Premonition: The Director’s Cut — Deadly Premonition: The Director’s Cut focuses on the story of FBI special agent Francis York Morgan as he investigates the murder of a young woman in the town of Greenvale. In this small town, players have to solve a murder mystery and survive against the killer and supernatural creatures that have taken residence.

Along with the original story and gameplay, there are some new features, including improved HD graphics, an updated control system, a brand new scenario from the game’s director, Hidetaka Swery Suehiro, and DLC to keep the mystery going once you complete the main campaign.

Telltale Games’: Poker Night 2 — In Telltale Games’ Poker Night 2, players will be joined by an all-star cast: Claptrap from Borderlands, Brock Samson from Venture Bros., Sam from the Sam & Max, Ash Williams from Army of Darkness, and more.

Players at the table will be assured of a fair hand dealt under the unblinking gaze of a Genetic Lifeform and Disk Operating System from Aperture Science research facilities. Otherwise known as GLaDOS from the Portal and Portal 2 games. Telltale Games’ Poker Night 2 also offers the chance to win Bounty Unlocks: rewards for use within other games when special goals are achieved. With cunning and skill, players can unlock prizes for different in-game items.

T.A.C. Heroes: Big Red One (For PSP) — Join the Big Red One, America’s most legendary infantry division. Relive some of the most epic and memorable battles from World War II. Command troops to occupy enemy positions, capture enemy officers, destroy enemy vehicles, and more. Customize your infantry with authentic weapons and use superior tactics to win the war.

Katamari Damacy — Ever wonder what it would be like to roll around and collect everything you touched in one massive heap? Well that’s exactly the premise of Namco’s strange action game Katamari Damacy. In it, players assume the role of the Prince of the Cosmos as he undertakes a quest to right the wrongs of his father who accidentally knocked the stars out of the sky. The only way to fix it is to roll around the world and collect as many items as possible in one gigantic clump. Both a single player story mode and two-player battle feature are included for the romp, and gamers will be able to accumulate hundreds of different items of various shapes and sizes.

[Editor’s Note: The following dates are subject to change. Game details are gathered from Press Releases, Retail Descriptions, from their individual publishers and/or ESRB rating descriptions.]