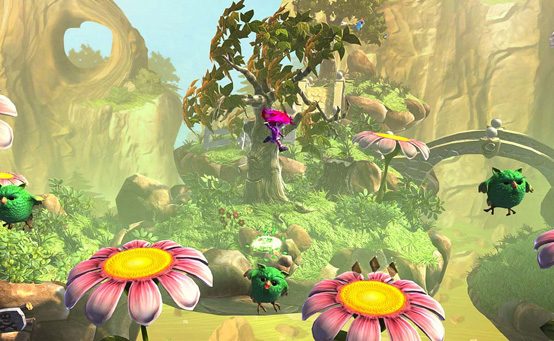 Hello everybody! The screenshot you can see above is from Giana Sisters: Twisted Dream, coming to PlayStation 3 later this month. It was developed here at our relatively new development studio Black Forest Games. It was also completed with the help of Kickstarter backers, who donated enough money to finish the project. Black Forest Games was the first German independent developer who managed to successfully run such a campaign!

Now you might say, “Black Forest Games? Never heard of that company!” No problem! Let me introduce you to our fine little organization.

Once upon a time there was a game studio called Spellbound Entertainment who created successful titles like Desperados, Airline Tycoon and Robin Hood – just to name a few.

Unfortunately the company went under in 2011 and had to close its doors – a rather sad end of an era. After the dust settled, the core Spellbound team gathered strength and founded Black Forest Games, bringing with them as many team members as they could. They opened the office doors again in 2012 in the small town of Offenburg, in south west Germany near the famous Black Forest – hence the name!

Nowadays the team is on their feet and thriving, with 40 members from all over the world. BFG is fairly diverse, we have talented people from Canada, USA, South Africa, Russia, Belarus, France , Egypt, and of course Germany. So yes, you guessed right, English is the language to speak in the sacred halls of Black Forest Games.

Giana Sisters: Twisted Dreams is the first title of our independent studio, and the story behind this game and how it came to be is something of an epic and enthralling tale. We’ve created a fast-paced old school platformer with a modern look and a unique twist! During your wild journey through the game you can change into another form of Giana – the so-called ‘Punk Giana’ – and see how the world around you changes as well. We’ll discuss this morphing effect in a future Blog post.

Giana Sisters: Twisted Dreams is a real challenge and a game where you need dexterity, wit and fast reactions. But first of all, it is a lot of fun! Master each level, collect the gems, overcome the many different monsters and obstacles, and reach the final boss – the evil dragon who captured your sister.

In the meantime feel free to watch and enjoy the video that gives you a glimpse of the life at Black Forest Games. Enjoy it!