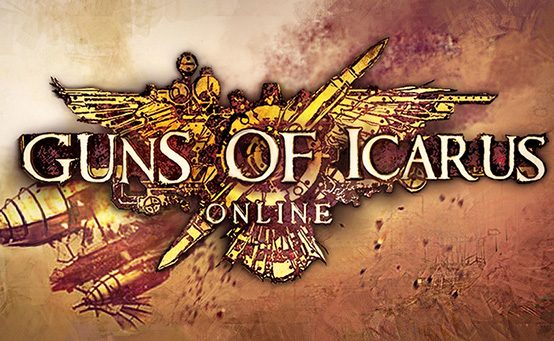 What if you took the thrilling moments of using those big mounted turrets in shooters and made it the core of a game? You blowing stuff up with this mammoth artillery or heavy machine gun, mowing down lines of enemies. What if, instead of being alone, you were placed in an enclosed space with 3 other people on an airship in the sky, bringing down enemies, triumphing, and perishing together, as a single entity? Coordinating which guns to man, what needs repairs, all hell breaking loose on deck as other ships are torn apart around you.

In Guns of Icarus Online, you and your crew slip into specific roles to steer the ship in and out of combat, hop on big guns to take out enemies, and make desperate repairs in hopes you survive another encounter with an airship that approaches you from beyond the horizon.

We started this journey on napkins and notepads. We wanted to push the boundary of team play, and experiment with a blend of play types that haven’t been seen before. Guns, fire, explosions — and above all, a sense of urgency, action, and power.

This dovetailed with our concept for a ruined world, with large, dieselpunk airships and bands of marauding air-pirates patrolling the wastes. We balanced an offensive turret shooting element with a defensive repair game that drew inspirations from time management games like Curry House CoCo Ichibanya and Diner Dash. We knew communication would be essential, and we gave people the ability to communicate by voice chat and take the helms of airships at high speeds in massive maps with unique challenges and vistas.

The road to get to this point hasn’t been easy. There were times when we were almost down and out. During the prototyping phase for Guns of Icarus Online, our steam and dieselpunk world was threatened by compromise from another party. We left the relationship, but were almost broke as a result.

With that whole ordeal behind us, we basically started over. We turned to the then still nascent Kickstarter, before Double Fine changed everything. When we completed our campaign, we were the 8th highest funded game project at the time, and had over 350% of our funding goal.

Kickstarter helped draw attention, get the word out, and also enlist over 1500 willing alpha testers, which was huge. We did all the fulfillment work on nights and weekends, drawing sketches in logbooks and packing stuff. A few hundred packages per trip to the post office later, the post office lady literally told us, “Get out!” as soon as we walked in the door with more big bags of packages.

Our launch date on PC was Oct. 29th. Being based in NYC, that date was significant for another reason. That was the day Hurricane Sandy made landfall right smack in the middle of Manhattan, where our office was located. Our building was locked down for almost a month — no power, internet, lots of flooding, etc.

We were supporting players and maintaining servers via candlelight. To get the hotfixes out, we had a big problem. Our computer to build new updates was locked in our still-flooded office. My teammate, Conrad Kreyling, biked in, eluded the security guard, scrambled into our room, and rescued the computer during the eye of the storm. He then ditched the bike and rode the bus to one of us who still had power. That’s how the first update of the game was made, and while not every update requires minor acts of heroism, we approach our customer service with that same level of vigor every day.

Whether it be a PC feature, or having casters such as Jesse Cox, AngryJoe, and Yogscast in the game, we were super fortunate to have made it to the top of the Indie scene.

We’ve had 9 award nominations and several wins now for Guns of Icarus Online, and each time this happens we take a moment to look back on our work with pride… and then a few minutes later we’re back to supporting players and fixing stuff. It’s been a humbling and exciting journey so far, and we couldn’t be prouder to work with all the awesome people at PlayStation to bring Guns of Icarus Online to PS4.