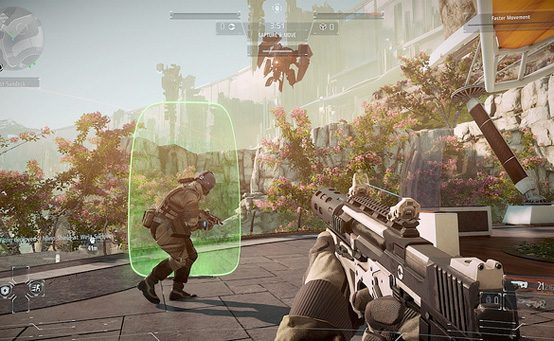 It’s been 30-odd years since the events of Killzone 3, and my, how things have changed. The fearsome Helghast are now refugees, their homeworld annihilated in a nuclear firestorm. In a desperate bid for survival, the surviving Helghast emigrate to an idyllic planet controlled by their mortal enemies, the ISA. Unrest simmers, leading to the construction of a vast security wall intended to separate the Vektan haves from the Helghast have-nots. A long, fragile peace is shattered following a terrorist strike (seen in Killzone Shadow Fall‘s February 20th at PS4’s debut conference), prompting the ISA leadership to bring out the big guns. That’d be you, elite Shadow Marshal operative Lucas Kellan. Your mission is simple: Restore order at any cost.

Launch game or no, Killzone Shadow Fall’s campaign is a visual stunner on PS4, rendering a smorgasbord of reflections, dynamic lighting, and billowing smoke at a razor-sharp 1080p native resolution (1920 x 1080). It’s as if developer Guerrilla Games wanted to cast off every technological limitation from the PS3 era all at once. Combined with Shadow Fall’s expanded color palette and sprawling environments, the results are spectacular.

Shadow Fall isn’t set on a traditional battlefield and Lucas Kellan isn’t a traditional army grunt. Kellen packs state-of-the-art military gear such as the OWL, a military done that can provide cover fire, deploy shields, or serve as a zipline for traversing wide expanses via a quick swipe on DualShock 4’s touchpad. Kellen can emit a “tactical echo” ability to highlight nearby enemies, or slow time to get the jump on his enemies.

Shadow Fall’s combat also infuses a stronger sandbox sensibility, giving players far more control of how, where, and when they launch their attacks. White-knuckled firefights can be supplemented with stealthy takedowns and traps, making the game far more nonlinear than its predecessor. And the single-player campaign is no lightweight, weighing in at more than 10 hours.

Then there’s the competitive multiplayer mode which runs at native 1080p* and 60 fps. Supporting up to 24 players across a variety of play modes, Shadow Fall’s multiplayer combat feels more agile and responsive than its predecessor thanks to DualShock 4’s many refinements and, well, dat framerate.

Shadow Fall breaks from the multiplayer pack in several notable ways. For starters, you’ll start with the game’s full arsenal (22 guns) and you’ll complete skill-based challenges (1,500 in all) in order to upgrade your gear and abilities. But perhaps most enticing are the player-created Warzones that will begin popping up once Killzone: Shadow Fall lands on November 15th. We’ll have more Killzone Shadow Fall coverage leading up to PS4’s launch in less than two weeks!

*Update March 5th, 2014: After seeking clarification with developer Guerrilla Games regarding Killzone Shadow Fall’s multiplayer resolution, we learned that the game uses a “reconstruction technique to combine samples from two 960×1080 frames to form a new full 1080p frame.” The developer is scheduled to present a Game Developers Conference technical session that will dive deeper into the technique of rendering multiple lower-resolution buffers in order to create a 1080p image. I’m grateful to those readers who asked questions and sought clarification on this topic, and I apologize for not capturing this detail in the original post.