Hands-on with Strider on PS4 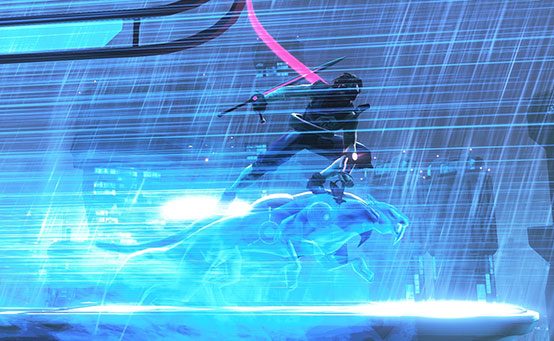 The wintry streets of Kazakh City are teeming with soldiers, automated sentry turrets, and terrified citizens. This striking blend of Russian architecture and dystopian elements set the stage for Strider, which launches for PS3 and PS4 next month. When we first saw Strider running last year, we enjoyed an early look at the PS3 version. This time the PS4 version took the spotlight.

Set in an alternate future of Earth, the world is ruled by the mysterious Grandmaster Meio. Hiryu, the youngest recruit of the Strider program, accepts the mission to eliminate Meio and end his tyrannical supremacy. Hiryu arrives in Kazakh City and is quickly engulfed in conflict.

At its core, Strider is a side-scrolling action game with breathless combat and a near feverish pace. Players explore Kazakh and earn upgrades and powers along the way, which in turn enable them to access more areas of the map. All the action revolves around Hiryu, who blazes across rooftops, over wires, through buildings, and down walls with an absolute dominion over fear. Anything that stands in his way gets sliced to ribbons by his indestructible plasma weapon, the Cypher.

The PS4 version of Strider runs about as smooth as Hiryu does (read: smooth). As players traverse the environment and cut up the opposition, the screen explodes with light effects, smoke, laser fire, and the sizzling remnants of fallen soldiers. The tension rarely lets up, and keeps a breakneck pace throughout the opening sections of the campaign.

DualShock 4 fits Strider perfectly, with responsive controls and a satisfying, oft-used attack button. The developers at Double Helix have made a tremendous effort to align the visual and aural feedback of Strider together. This makes cutting through lines of enemies blissful, as the sound effects and on-screen feedback mesh with intoxicating elegance. Who knew that pounding away at the Square button could be so sublime?

Clicking the touchpad opens up a map of the world, which is crammed with useful information. Based on the starting areas, Strider’s play space is sizeable. Pulling up the map for reference and doubling back for secrets is critical to Hiryu’s success, and also helps players keep track of secret upgrades that might otherwise be missed. And like other action games of this type, health and energy upgrades are paramount to survival.

Kazakh itself is laced with details both large and small — which are easy to miss with Hiryu leaping frantically from one location to another. Massive buildings rise up through the snow in the backdrop. Monuments stand rigid and gaze down with a menacing air. Citizens wait for trains in the station, and computer monitors flicker on their ceiling mounts. Hiryu sprints through homes, libraries, storage facilities, and palaces — all while avoiding enemy fire and cutting down his enemies.

But don’t linger on the sights for too long — Hiryu has a mission to complete, and Kazakh’s military is hell bent on stopping him. Fortunately for us, taking them on is a lot of fun, and gives players a lot of stuff to split apart with a glowing energy weapon.