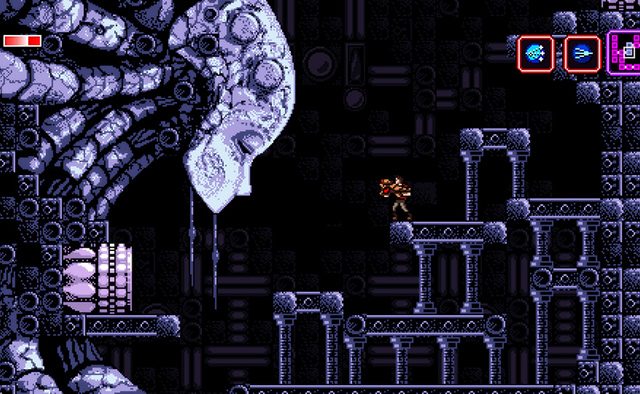 I’m Tom Happ, the sole programmer-artist-designer-composer person behind Axiom Verge, a 2D side-scrolling action-adventure coming out on PS4 and PS Vita in early 2015. If you’ve not heard of Axiom Verge (or even if you have), the best thing to do is to put on your best pair of headphones and watch the trailer below:

So, What’s This About Glitches?

People usually try to describe games in terms of other games, established genres, numbers of items to find, numbers of modes to play, etc. And if it’s an indie game, there is often a mind-bending new mechanic involved (“Can only be played during a tracheotomy!”) as well. I’ll give you these bullet points in just a bit.

But first: Think of your earliest encounters with video games – before you had any preconceptions of what to expect, how they were made, or why they were made that way. Didn’t they just seem magically limitless? It might be that a game only had a set number of areas and tight constraints on what you could do, but for all you knew, the world continued past the edges of the screen, if only you could figure out how to get there.

Eventually, of course, you come to realize that there are limitations to these virtual worlds, and, ultimately, you end up seeing the entirety of what was designed to be seen. But then, if you were fortunate, there might have been a time when a flaw in programming of the game allowed you to see or experience something that was not intended – a secret world, a glitched-out character, an item with bizarre stats and effects when used. And then there was that magical feeling again – that the world continued beyond the boundaries presented, and who knew what you might find?

Back of the Box Bullet Points

Axiom Verge is a retro-styled 2D “metroidvania” action-adventure, inspired by such classics as Rygar, Contra, Bionic Commando, Blaster Master, and, of course, Metroid. But it also gives you power over glitches like those found in classic games, allowing you to scramble enemies, corrupt environments, and enter hidden areas.

When I say that Axiom Verge features glitches as a major game mechanic, please don’t take that as some self-reflexive fourth-wall-breaking joke about dusty old cartridges or the like. Nor am I going to pile on glitch after glitch just for the sake of being different. Instead, picture this: you have a full game that would be awesome on its own – your dream Metroid + Contra + Bionic Commando + Blaster Master or what have you – but then, what if in addition to that game, you were given the means to break past the edges of the world and see things beyond — things that weren’t and couldn’t have been designed for you to see?

It’s a hard thing to do; maybe impossible. But if Axiom Verge can bring back even part of that magical feeling, I will feel that it’s been a success.

From AAA to Indie

I’ve actually been working on Axiom Verge for over four years now, most of that being part-time after-hours, while during the day I was a programmer for the (awesome and thankfully flexible) folks at Petroglyph Games, developing such titles as Grey Goo and End of Nations. While I wouldn’t trade those years for, it did mean that work on AV progressed at a glacial pace.

So you can understand where I’m coming from when I say that Sony’s Pub Fund was one of the best things ever to happen to me (and to Axiom Verge). I can now work on AV full-time, which has a whole host of benefits, not the least of which being the fact that development is going at light-speed compared to before. And since it’s headed to PS4 and Vita, it’ll be exposed to way, way more gamers than I ever imagined.

Speaking of gamers, I’ll be checking the comments on this blog post. I’m curious about what people would most like to see in Axiom Verge. And, do you have a favorite classic gaming memory? Or a particularly enjoyable glitch you’d like to share? If you’re a speedrunner, is there a feature I can add that you’d find particularly helpful for that?