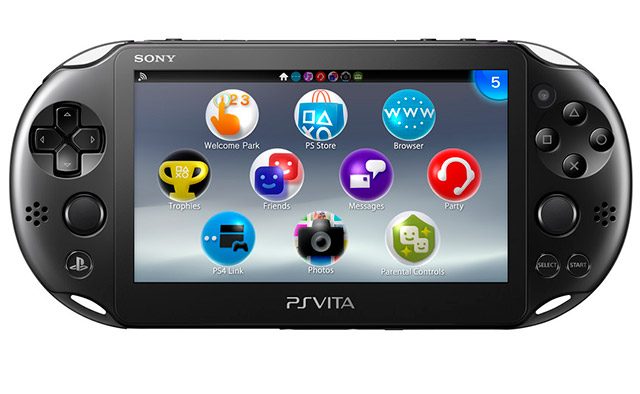 The day has arrived – the new slimmer, lighter PlayStation Vita model is now available at retailers across North America. Pick up the new model today as part of the Borderlands 2 Limited Edition PlayStation Vita Bundle, featuring the first-person role-playing shooter Borderlands 2 with six DLC packs and an 8GB memory card, all for $199.99 (MSRP). This is a limited edition bundle, so don’t miss your opportunity to pick up the new PS Vita model today.

Hands-on the new with PS Vita

PS Vita’s new design has tons of tweaks and adjustments, aside from the obvious thinner design and weight reduction. The Start, Select, Power, and PS buttons have been raised slightly, making them easier to press. The grips on the back of the system have grown a bit, resulting in a more comfortable experience… and less accidental taps on the rear touch pad. The edges of the system are more rounded, which just feels better. The display is now LCD based, but I didn’t notice a dramatic difference in picture quality.

The new model is approximately 20 percent slimmer and approximately 15 percent lighter than the original and features 1GB of internal memory, extended battery life, a new high-definition liquid crystal display (LCD) and rounded edges that make PS Vita even more comfortable to hold. PS Vita is the ultimate companion for any gamer with more than 1,000 games available (including classic games from PS one and PSP) and “Remote Play” with PlayStation 4, which allows most PS4 games to be streamed to the PS Vita system over a local Wi-Fi network. Pairing your PS Vita with your PS4 to use Remote Play is even simpler with last week’s system updates. The content library for PS Vita will become even richer when PlayStation Now support launches on the system later this year.

May is a big month for PS Vita, right? Well it doesn’t end there, with Helldivers launching this summer and Minecraft, Metrico, Tales of Hearts R, Freedom Wars, The Binding of Isaac: Rebirth and Hotline Miami 2: Wrong Number all expected to release in 2014.

Check out the sidebar of this post for the PlayStation.Blog team’s hands-on impressions of the new slimmer, lighter PS Vita and let us know what games you can’t wait to play on the new model in the comments!