Behind the Music and Sounds of Transistor 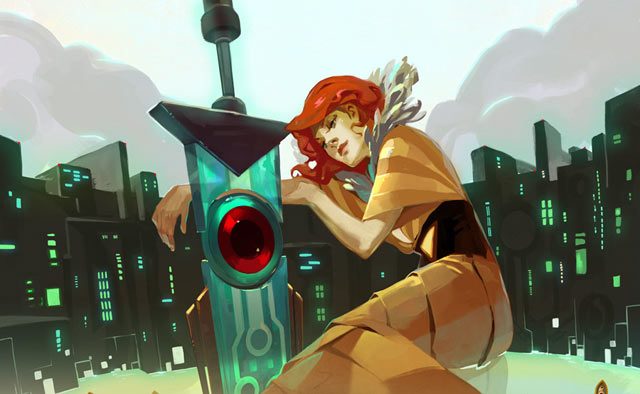 Hey everybody! I’m Darren, the audio director at Supergiant Games and composer for Transistor. I’ve been blown away by the amazing response the game and the music have been getting, and I thought I’d tell you a little bit about my approach to the game’s music. From our point of view as a team, audio is a really important part of creating an immersive, atmospheric experience, and everything I do as audio director is in service of that. Supergiant is based in of San Francisco, but Logan Cunningham (our talented voice actor) and I are all the way in New York. Since we’re a small team, we have to make do with whatever we can get our hands on when it comes to making games!

That’s my apartment (and dog and baby) to the right. Just about all the sounds and music in Transistor were created here. The constraint of working out of my home studio, with only the resources available to me, is a big part of my creative process. It means that all the music in the game is made up of some combination of recorded instrument parts that I play myself, as well as software instruments or samples from a sound library — and also Ashley Barrett’s vocals, which we knew would be a big part of the game. At the moment I don’t really have the means to record live drums properly (neighbors…), so I end up using a lot of samples and software instruments for percussion tracks.

“I tried to create a genre, which I ended up calling ‘Old-world Electronic Post-rock.'”

The main thing that I try to focus on when composing is vibe. What should the piece feel like? If I start with a particular feel in mind, this dictates a lot of things about the piece right away, such as tempo, production aesthetic, tonal palate (happy, sad, major, minor, and so on), and gives me some useful constraints for how to proceed. For Transistor, it was also important to me to define the sonic palate of the game overall. By selecting a handful of instruments and using them to varying degrees throughout all the pieces in the game, I could connect the pieces to one another sonically, even though the content of each piece was very different. To help out with this process, I tried to create a genre for myself to work within, which I ended up calling “Old-world Electronic Post-rock.” After a lot of experimentation, I zeroed in on electric guitars, harps, accordions, mandolins, electric piano, and synth pads as some of the primary textures in the game. Each of these instruments tries to express some component of that genre mash-up.

From an implementation standpoint, I wanted to try something I had never tried before: multi-channel music! For Transistor, every piece of music in the game consists of multiple stems playing at once, which we can then manipulate individually in real time. This lets our level designers turn certain tracks on and off at will, and we can also apply real-time effects to individual channels. For example, when the player enters Turn() mode, we apply an EQ filter to the music tracks, and bring in a vocal track that is silent during real-time gameplay. We really liked how this sounded during development and ended up using it throughout the game. This multi-channel approach also lets us get a lot of mileage out of each piece based on which channels we use at a given time. Sometimes just playing the percussion of a given piece of music adds a lot of tension to a scene!

Get the Transistor Soundtrack here

If you’d like to have a listen to how it all came together, we’ve posted the Transistor Original Soundtrack online in its entirety! We recommend playing through the game first though, since the game and the music are so closely tied.

“The vocals for the soundtrack were recorded… in my closet.”

Though I composed all of the music myself, it really was a team effort to get it all implemented the way it’s presented in the game. Chris Jurney, one of our awesome engineers, was instrumental in the technical setup of this stuff. Greg Kasavin, our creative director, did most of the scripting of when these types of multi-channel changes actually occur in game. And Camilo Vanegas, our incredible animator/3D modeler, was responsible for creating the beautiful, mournful animation you see when you press the L1 button to hum a song, and the vocal track comes in. Amir Rao our studio director first thought of the idea that maybe you could stop and hum a song at any point, and we’re really happy we got that in the game and that it’s been so well received.

The vocals were also a really important part of this game. After all, you play as a singer! I was lucky enough to work with my friend Ashley Barrett who provided all of the vocal tracks you hear throughout the game. We worked together over a two-year period and more than a dozen sessions to put together all the vocals for the soundtrack, which we recorded… in my closet:

No kidding! The setup isn’t fancy but for us, it works. Now I could go on all day about all the aspects of the audio in Transistor, though perhaps that’s for another time! Thanks again to everyone for being so enthusiastic about the game, and we really hope you enjoy it. The outpouring of support has been overwhelming, and I can’t wait to hear from the rest of you!