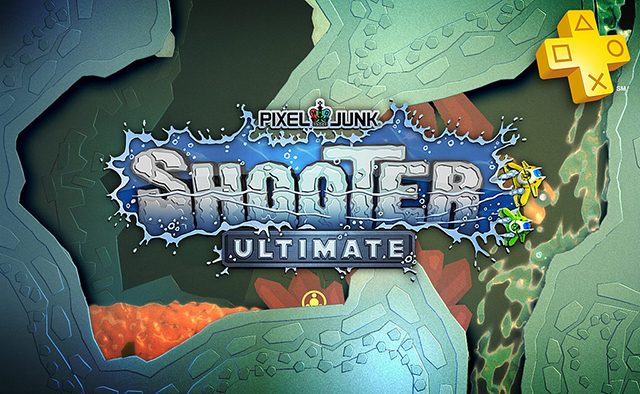 A rogue, a wizard and a knight are the best of friends (well, they work together at least) in Trine 2: Complete Story. You’ll either play as all three characters, rotating between them as you need their unique abilities, or you can grab a couple friends to take control of the two other heroes. Of course, you might all be too busy drooling at the art to solve any puzzles, but that’s okay.

In case you missed it in the PS Plus June Preview, you’ll be happy to see that there’s another PS4 game free this month. PixelJunk Shooter Ultimate is a combination of the well-loved twin-stick shooter games (PixelJunk Shooter and PixelJunk Shooter 2) that released on PS3. Not only is the Ultimate version cross-buy, which means Plus members will also get the Vita version, but it includes cross-save and cross-play functionality.

Last, but not least, we’ve got NBA 2K14 on PlayStation 3 for you — just in time for the NBA Finals. LeBron James stars in the new Path to Greatness Mode, where you can suit up as the reigning NBA champion and develop your own future for him.

Become a PlayStation Plus member

Trine 2: Complete Story is a beautiful, award-winning sidescrolling game of action, puzzles and platforming. Play as the three Heroes – Amadeus the Wizard, Pontius the Knight, and Zoya the Thief – and join their adventure through dangers untold in a fantastical fairytale world, including physics-based puzzles using fire, water, gravity and magic wicked goblins and their evil plan and a magical environment full of wonder.

PixelJunk Shooter Ultimate is a twin-stick shooter with equal elements of action, exploration and puzzle solving. Saving scientists and uncovering the mysteries of an ill-fated research trip requires you to study and manipulate your environment. Blast and dig through rock and ice, unleashing floods of water, lava, gas, magnetic oil and even deadly stomach acid, all powered by an advanced fluid mechanics simulation.

NBA 2K13 was a monstrous release for the world’s #1 NBA video game franchise, with more than 38 Sports Game of the Year and ‘Best Of’ mentions. NBA 2K14 will raise the bar yet again, providing the best basketball gaming experience for legions of sports fans and gamers around the world.

If you’ve got feedback on today’s Plus update, make sure to vote in the poll and leave a comment below. To discuss all things PlayStation, including this update, you can also head over to the PlayStation Community Forums where you’ll find topics you can contribute your thoughts to, or start one for yourself.