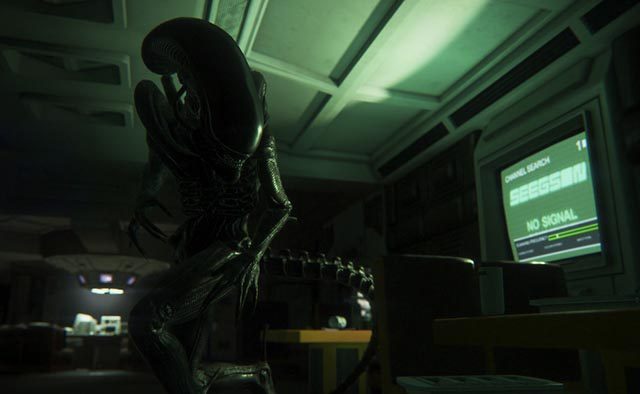 We’re incredibly excited to be showing Alien: Isolation at E3 this year. This will be the first time we’ve had so many people get their hands on the game in North America. It’s thrilling for us, as the development team, to watch players immerse themselves in our lo-fi, sci-fi, 1970’s original take on the Alien universe.

We’re pleased to be revealing the new features of the wider game. Firstly, the human survivors — abandoned on the remote space station the game takes place on. They’re in the same position as the player, they too are desperate to survive and that makes them unpredictable. Sometimes they react positively to the player, sometimes they can be aggressive.

Next are the Seegson Synthetics — these are rudimentary, bio-mechanical creations. They too are hard to read. Sometimes their presence is beneficial, but it’s not guaranteed. Built to last, any form of antagonism should be avoided.

Finally we’re introducing the Crafting System. This allows items and components found in the world to be combined into rough and ready improved tools and devices that, if used in the right place at the right time, might just improve your chances of surviving. For example the Noisemaker — an unusual, hastily created, electrical device with two speakers on either end. When thrown into the world it creates a lot of noise, attracting the attention of anything nearby and allowing the player to slip past unnoticed.

Also on the show floor we have a hands-on demo featuring a further mode from the game. This is a time-based challenge where players are tasked with escaping a confined space whilst having to contend with the Alien. It’s a really intense experience that everyone should check out.