The Legend of Korra on PS4: PlatinumGames Joins the Avatar 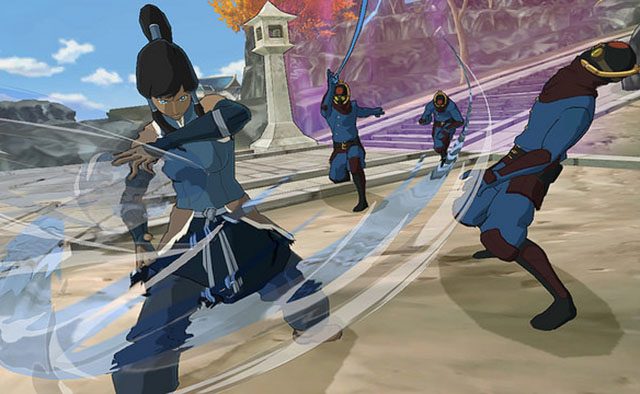 It’s no easy task to adapt the critically acclaimed animated series The Legend of Korra into a third-person action game. The beloved show fuses martial arts, varying philosophies and world cultures, and an exquisite story that follows in the footsteps of Avatar: The Last Airbender.

What better studio to take up the challenge than PlatinumGames (Bayonetta, Metal Gear Rising: Revengeance)? The team has spent years meticulously crafting combat systems that marry style and substance into a visual maelstrom of fast, addictive action. And with Platinum’s knowledge of martial arts choreography, Korra couldn’t be in better hands. Revealed just yesterday, The Legend of Korra is coming to PS4 and PS3 this year. And we got to play it.

The Legend of Korra follows our rough-around-the-edges-but-ever-so-charming hero after the events of Book Two, but before the start of the upcoming Book Three. For those unfamiliar with the Avatar universe, Korra is the latest incarnation of a long, long line of peacekeepers meant to preserve order between four nations, as well as bridge the human world with the spirit world. At the start of The Legend of Korra game, Korra has suddenly lost her ability to bend (manipulate the elements) following a strange encounter with a shadowy force.

In the interest of avoiding spoilers, let’s just say the demo Platinum showed off revolves around Korra recovering her bending abilities, unlocking each element in turn — starting with waterbending.

The moment that Korra sets foot on Air Temple Island, it’s clear that Platinum has invested a great amount of energy into making this an authentic experience. While Korra and her opponents are rendered using cel-shaded visuals, the backgrounds are an eye-catching fusion of 3D set pieces and painted backdrops. The Legend of Korra runs smoothly even in its incomplete state, a key requirement for a combat-heavy game.

Korra’s ability to bend all four elements means that the player can harness four different fighting styles that each play a role on the battlefield. Korra can throw whips of water to attack chi blockers at a distance, or meet aggressive mobs with slow and powerful earthbending techniques.

The Square and Triangle buttons govern the different attacks, with each strike in a combination capable of an additional charge for extra damage. This system is easy to pick up but also provides more weathered gamers room to develop finesse — especially when it comes to counters.

In true Platinum fashion, hitting block at just the right moment will enable Korra to reverse an attack, leading to a spectacular counter move. Like Metal Gear Rising, these counters are snappy and satisfying, layering a much-appreciated need for precision on top of Korra’s moveset.

And what third-person, Platinum-developed action game would be complete without a few juicy RPG elements? Indeed, Korra can slowly level up each bending art to allow for more devastating abilities, from summoning whirlwinds to knocking boulders into the air. Special finishing techniques will also be purchasable from the in-game shop, which means gamers get a little loot spice for flavor.

Of course, Platinum has worked closely with the series creators in its effort for an authentic Avatar experience. One of the show’s lead writers helped script the story, and the actors behind Korra and the gang have returned to lend their voices to the characters. Platinum even went so far as to study martial arts reference material in order to best showcase the beauty and power behind bending.

Lastly, Platinum confirmed that a pro-bending mode has been fully recreated in The Legend of Korra, including the actual rules from the show. Take it as icing on the cake!

The Legend of Korra arrives on PS4 and PS3 this Fall, and will also feature a few surprises that “scream” PlatinumGames. Whatever that means, it’s probably amazing.