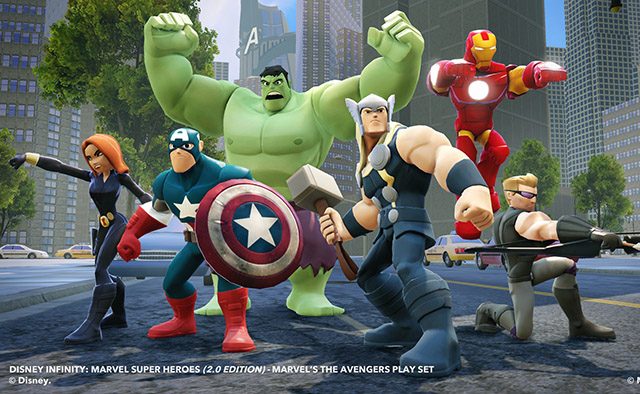 In addition to the Avengers Play Set that comes inside of the Starter Pack, you can also pick up Marvel’s Guardians of the Galaxy and Spider-Man Play Sets along with additional character figures from those worlds separately. All three Play Sets take you on new super-powered story-driven adventures in the Marvel universe. Additionally, they feature new character and combat systems and larger worlds than the first installment of Disney Infinity.

The new Toy Box 2.0 mode has a ton of new features and items to explore. We’re all really excited to see what you guys create. The new tools really make it easier for players of any age to pick up the controls and create one-of-a-kind levels. The Toy Box Game Discs are something new too – these come with the Starter Pack and provide several hours of repeatable, structured Toy Box gameplay complete with cut scenes. With the 40 Marvel Power Discs available now, you can access everything from the Winter Soldier Team-Up to Spider-Man’s Symbiote Costume and Star-Lord’s Knowhere Sky.

Team up with the Winter Soldier and catch your enemies in the crossfire.

Community is incredibly important to us, and the new Toy Box 2.0 mode opens up many more options for downloading and sharing Toy Boxes. Not only can you share your own custom 2.0 Toy Box levels, we’ve hired a whole team devoted to bringing you free 2.0 Toy Boxes to play every week. We hired five team members directly from the community to create top-notch Toy Boxes, because really who else knows the Toy Box better? If their launch Toy Boxes — which include a Gravity Falls-themed 2D fighting game and a race to eat as many pastries as you can as quickly as possible (?!) — are any indication, these guys are going to be creating amazing content.

Thanks for reading, everybody! There’s even more 2.0 Edition to come: the Disney Toy Box Starter Pack and 2.0 Disney characters will be released on November 4th. On behalf of the whole team, we hope you have a blast playing the game!