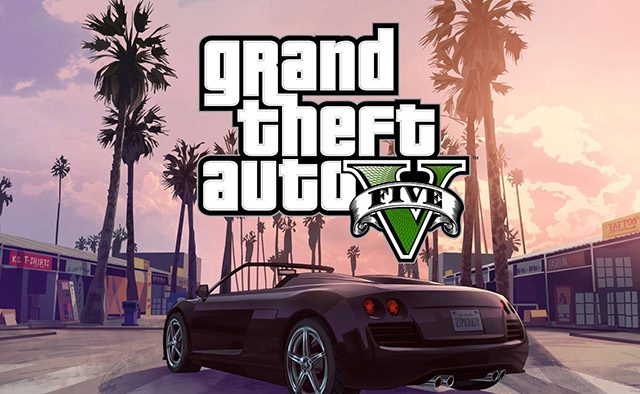 Bright lights, big city. It’s time to head back to Los Santos and drown in a life of luxury and crime. Grand Theft Auto V hits PS4 this week, ushering Rockstar’s colossal open world into a new generation of gaming.

In Grand Theft Auto V, players follow the intersecting lives of three criminals struggling to survive in a city soaked with fame, fortune, and violence. Jump between them and explore one of the most intricately detailed open worlds ever created. Amass a fortune, silence the competition, drive exotic cars… or just play some golf. GTA V welcomes it all, and invites Grand Theft Auto Online players to carry over their progress from PS3 or Xbox 360 to PS4.

But that’s just the start of the spectacular lineup this week. LittleBigPlanet 3 hits PS4 and PS3 and introduces a cadre of new friends for Sackboy. Far Cry 4 opens the gates to a Himalayan open world oppressed by the rule of a psychopathic tyrant. And Dragon Age: Inquisition tells the sweeping story of a hero cursed by dangerous magic.

For the full list of games coming to PlayStation this week, read on. And enjoy the Drop!

Adventure Time: The Secret of the Nameless Kingdom
PS3, PS Vita — Digital, Retail
What time is it? It’s time to join Finn (the human) and his best bro Jake (the shape shifting dog) on an original heroic adventure through the mysterious Nameless Kingdom. Go on epic quests, solve challenging puzzles, and uncover hidden secrets.
Dragon Age: Inquisition
PS4, PS3 — Digital, Retail
A cataclysmic event plunges the land of Thedas into turmoil. Dragons darken the sky, casting a shadow of terror over a once-peaceful kingdom. Mages break into all-out war against the oppressive Templars. Nations rise against one another. It falls to you and your party of legendary heroes to restore order as you lead the Inquisition, hunting down the agents of chaos.
Escape Dead Island
PS3 — Digital, Retail
Escape Dead Island is a survival mystery adventure that follows Cliff Calo, who sets sail to document the unexplained events on Banoi. Arriving on the island of Narapela, he finds that not everything is as it seems. This title lets players delve into the Dead Island universe and unravel the origins of the zombie outbreak.
Far Cry 4
PS4, PS3 — Digital, Retail
In Far Cry 4, players find themselves in Kyrat, a breathtaking, perilous, and wild region of the Himalayas struggling under the regime of a despotic, self-appointed king. Using a vast array of weapons, vehicles, and animals, players will write their own story across an exotic open-world landscape.
Grand Theft Auto V
PS4 — Digital, Retail
When a young street hustler, a retired bank robber, and a terrifying psychopath find themselves entangled with some of the most frightening and deranged elements of the criminal underworld, the U.S. government and the entertainment industry, they must pull off a series of dangerous heists to survive in a ruthless city in which they can trust nobody, least of all each other.
Hatsune Miku: Project DIVA F 2nd
PS3, PS Vita — Digital, Retail
Hatsune Miku, the world’s most famous virtual singer, returns in an all-new rhythm video game featuring the best new music and classic tracks reborn. Tap and hold the buttons, and scratch to the beat as you play through 40 addicting songs and four expansive difficulty settings that will keep you coming back for more.
The Jackbox Party Pack
PS4, PS3 — Digital
For 1-100 players! Your phones or tablets are your controllers! The team behind You Don’t Know Jack presents 5 guffaw-inducing party games in one pack. Players play using their phones, tablets, or even computers as controllers — making it the perfect entertainment piece for your next game night or party.
Kickboxing
PSone Classic — Digital
Become the king of the ring as you fight 14 different martial arts experts. Use crushing punches, kicks, and special moves to come out on top.
LittleBigPlanet 3
PS4, PS3 — Digital, Retail
Sackboy is back — and he’s bringing new friends Get ready for an all-new LittleBigPlanet experience as Sackboy teams up with his friends in his biggest, hand-crafted adventure yet! Three all-new playable heroes will completely change the way you play. Bound over walls as the quick and agile Oddsock! Glide through the skies as the majestic Swoop! Switch the size of Toggle to play as a large, heavy strongman or a small, light speedster!
Monopoly Family Fun Pack
PS4 — Digital, Retail
A new era of Monopoly for home consoles! The Monopoly Family Fun Pack gathers 3 Monopoly games: Monopoly PLUS, and Monopoly Deal — a fast-paced and addictive Monopoly card-game. Enjoy the classic Monopoly in new fun ways, with your friends and people all around the world!
MXGP The Official Motocross Videogame
PS4, PS Vita — Digital (PS4 Ver. at Retail)
The official Motocross is back! Put yourself to the test, racing in two MXGP championships with all the riders and bikes from the MX1 and MX2 categories! Take up the challenge from the promising young MX2 riders and the MX1 champions, and join them on the tracks! Race in the official events, faithfully reproduced for the first time in a Motocross game, with four brand new PS4 exclusive tracks.
Never Alone
PS4 — Digital
Never Alone is an atmospheric puzzle platformer for one or two players, built in partnership with the Alaska Native community. It delves deeply into the traditional lore of the Iñupiat people of Alaska to present a unique game experience.
Rabbids Invasion
PS4 — Digital
Rabbids Invasion, the kids’ hit animated TV show, is now on PS4. With motion gameplay, kids can now play in their living room with a selection of episodes from the TV show. Through fun, silly challenges, players have an outrageous time with family and friends and experience the Rabbids Invasion TV show in a brand new way.
Rollers of the Realm
PS4, PS Vita — Digital (Cross Buy)
Imagined and brought to life by indie developer Phantom Compass, Rollers of the Realm is set in an era of medieval lands, corrupt kings, and castles of yore with a twist: bounce on and attack enemies as a pinball! Your characters are the balls — meeting new characters will unlock new sets of equipment and abilities. Follow the story of the young Rogue and her Dog in this fully-voiced RPG that’s brimming with live environments and interactive puzzles.
Tiny Troopers Joint Ops
PS4 — Digital (Three Way Cross Buy with PS3, Vita)
Tiny Troopers Joint Ops is an epic, bite-sized arcade shooter, filled to the brim with action-packed mini maps of mayhem! Take control of your tiny troopers as you battle evil adversaries from around the world with a multitude of weapons. Recruit specialist mercenaries such as Medics, Machine Gunners and the Elite Delta Force to subdue enemy insurgents!
WWE 2K15
PS4 — Digital, Retail
WWE 2K15 will usher in a new era of WWE video games and deliver the gaming experience that fans have sought for generations. With a focus on core gameplay, visual and audio improvements, and new game modes, WWE 2K15 delivers the most authentic and action-packed WWE video game experience to date.