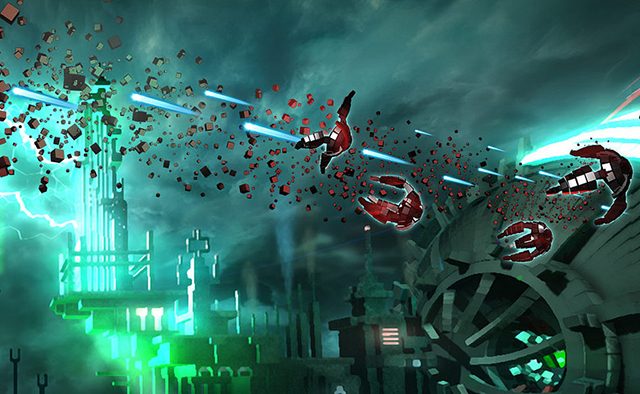 Epic explosions; voxels crumbling in raging torrents; impossible maneuvers to dodge dozens of enemies. One year later, Resogun is still as mesmerizing as it ever has been on PS4, and I’m pleased to announce today that Resogun is coming to PS3 and PS Vita for $14.99. That’s right Resofans, starting December 23rd you’ll be able to save the last humans anywhere, anytime.

The development team at Climax has done everything possible to make the PS3 and PS Vita versions of the game the very best they can be for each device, and I think you’ll be very impressed with what they have managed to achieve. Picking a game that was created specifically for PS4 and bringing it to PS Vita and PS3 is very difficult, and the hardest compromise to accept during development, especially in regard to performance and graphics, is that these platforms don’t have the capability and power of PS4.

Duly, the biggest technical difference is that the PS Vita and PS3 games run at 30 instead of 60 frames per second. This was a very difficult decision to consider, but a very necessary one to allow the team to focus on what was possible and to make the best game possible for both of these platforms. The framerate is locked, so you can expect solid performance even under a big storm of voxels.

It’s a great achievement that all of the features present in the original PS4 release are here in the PS Vita and PS3 versions and that the game is as addictive as ever, in great part due to having been tuned specifically for these versions.

The results are amazing, and having also worked closely with the team at Housemarque throughout this past year to help them create the expansions for the PS4 game, I’ve especially enjoyed playing the PS Vita version, with plenty of people looking over my shoulder in disbelief at how the game looks and plays.

Because we don’t want you to miss anything, the PS3 and PS Vita games have cross save functionality, so you can share your progress between both platforms.

The PS Vita version also has ad-hoc co-op so that you can team up with a friend. It also makes use of the touch features so you can fully customize the controls, using either the face buttons or the touch controls for any action possible. You can even throw humans with a swipe of your fingers on the rear touch pad!

I am pleased to confirm that these two versions will be cross buy — so if you own Resogun on your PS4, you will be able to download these for free!

We are officially declaring December as Resogun month, so stay tuned for more news about the PS3 and PS Vita versions, details of the next PS4 expansion, and much more. Thank you for reading and sharing!