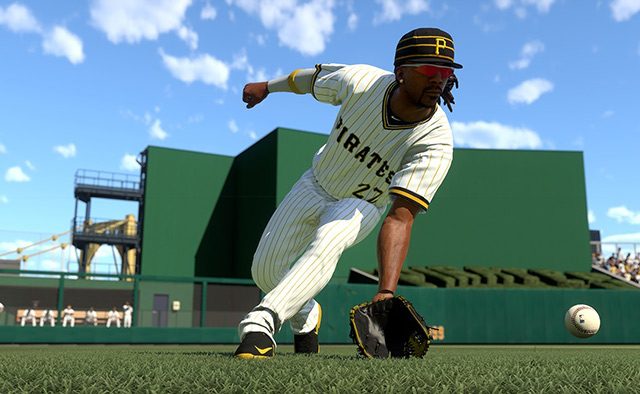 Celebrate the 10th anniversary of the legendary PlayStation baseball series. MLB 15 The Show steps up to the plate on PS4, PS3, and PS Vita this week. Baseball fans, rejoice.

In MLB 15 The Show, players are once again treated to one of the most authentic baseball experiences in gaming, with jaw-dropping stadiums and player models, a tremendous collection of modes, and several features that are brand new to the series. San Diego Studio has included licensed equipment to enhance that characteristic authenticity, as well as implement year-to-year saves. The team is also introducing iconic baseball legends from all 30 teams, spanning 70 years of the sport’s history.

And if baseball isn’t your bag, don’t sweat: the highly-anticipated Axiom Verge drops onto PS4 this week. Developed single-handedly by indie designer Tom Happ, this modern interpretation of the Metroidvania is deeply inspired by classic games, but pushed into overdrive with mind-bending puzzles and tons of weapons. If you want a great example of what a single, passionate game developer can do, look no further. Plus, it’s part of Spring Fever with a 10% PS Plus discount at launch. Bonus!

For a full list of games coming to PlayStation this week, read on. And enjoy the Drop!

Anna — Extended Edition
PS3 — Digital
Set in an abandoned sawmill nestled high in the Italian mountains, Anna challenges the player to uncover horrific clues and use them to solve puzzles related to your character’s dark past. The player’s behavior does not only determine the mental health of the main character but can also change locations and unveil new secrets.
Axiom Verge
PS4 — Digital
This is the action-adventure you’ve been waiting decades for. After a lab accident, a scientist awakens in a mysterious, alien world. Is this a distant planet? The far future? Or a complex, virtual-reality computer simulation? Plumb the recesses of a labyrinthine world to learn its secrets and uncover your role within.
Doodle Kingdom
PS Vita — Digital
It’s time to get MEDIEVAL! From the creators of puzzle games Doodle God & Doodle Devil, comes a fantasy brain-teaser where you can quest as a Dragon Breeder, Warlock and Knight! Daring adventure awaits you in this fantastical fantasy Kingdom where you can breed and raise four different types of Dragons.
MLB 15 The Show
PS4, PS3, PS Vita — Digital, Retail
The 10th edition of the franchise, MLB 15 The Show is a more immersive and exciting baseball experience than ever before with substantial improvements. New features include: year-to-year saves, licensed equipment, baseball legends, and more.
MX vs. ATV Untamed
PS2 Classic — Digital
Cut loose with dirt bikes, monster trucks, and more to perform insane stunts. Become the ultimate off-road champion!
Paperbound
PS4 — Digital
Paperbound is a smash-up brawler from the mind of a former Call of Duty: Advanced Warfare developer that combines platforming, twitchy combat, and gravity redirection in a competitive couch multiplayer setting.
R.B.I. Baseball 15
PS4 — Digital
Featuring fresh game modes, authentic Ballparks, improved animations, and deep stat tracking.
Rack N Ruin
PS4 — Digital
Join Rack on an epic adventure across a world filled with magic and wonder. Then watch in astonishment as Rack befouls, corrupts, slaughters, and brings about a general air of misfortune to everything and everyone he confronts.
Run Sackboy! Run!
PS Vita — Digital
Get ready to run like the wind as Sackboy sets off on a blistering adventure with the nasty Negativitron nipping at his heels. Collect chains of bubbles, find exciting power-ups, and unlock new costumes.
Shadow Tower
PSone Classic — Digital
With his entire home city swallowed by the underworld, Ruus Hardy vows to rescue everyone trapped by the demons. A PSone classic available soon on PlayStation Store.
TableTop Cricket
PS3 — Digital
Find the gaps in the field or just smack the ball out of the stadium, TableTop Cricket is a fast and furious take on cricket that takes you on a world tour with tense matches and challenges aplenty.
Toukiden: Kiwami
PS4, PS Vita — Digital
Go forth and eradicate the epic Oni menace! Toukiden: Kiwami is the sequel to Toukiden, consisting of all the content from the original title plus the addition of various elements and stories. Players take on the role of a Slayer possessing unique abilities, and alongside other Slayers, battle the Oni to save mankind from destruction.
Ultimate Action Triple Pack
PS3 — Digital
Survive the elements and dangers in Tomb Raider, uncover a criminal underground in Sleeping Dogs, or just blow things up in Just Cause 2.
Ultimate Stealth Triple Pack
PS3 — Digital
Sneak and steal in a haunting city cloaked in shadow, witness a strange, bleak future in Deus Ex: Human Revolution, or take down marks with style in Hitman: Absolution.
Woah Dave!
PS4 — Digital
From the folks behind the BIT.TRIP series comes the frantic insanity that is Woah Dave! Help our hero, Dave Lonuts, survive an insane alien invasion and line his pockets with shiny pennies. Hurl alien eggs, skull bombs, and explosive WOAH blocks to stay alive and sky rocket yourself to high score fame and fortune.