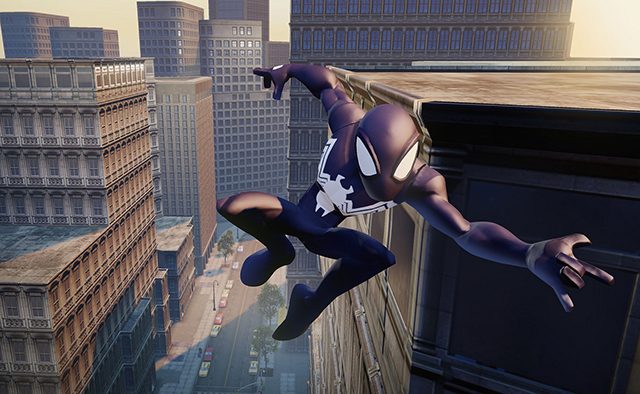 You may recall that we first revealed this version of Disney Infinity: Marvel Super Heroes (2.0 Edition) during PlayStation Experience last December, and now it’s finally here! PS Vita owners can start playing and creating their own adventures featuring some of their favorite Disney and Marvel characters on this amazing platform.

The Black Suit Spider-Man figure will be fully compatible with the console version of Disney Infinity: Marvel Super Heroes (2.0 Edition), but it will be making an exclusive debut to the Disney Infinity universe through PS Vita.

Disney Infinity: Marvel Super Heroes (2.0 Edition) for PS Vita will be available exclusively at GameStop for $59.99, starting on Saturday, May 9, 2015.

Before I go, I’d like to personally thank Adam Creighton and the team at Panic Button Games in Austin, TX for all of their hard work to get this version of the game out the door.

Also, special shout-out to Adam Boyes and the Third Party team at SCEA for encouraging us to get Disney Infinity (2.0 Edition) onto PS Vita. It is pretty wild to play the full experience on that beautiful, small screen!

And last but certainly not least – Thank you to all of our loyal Disney Infinity fans and PS Vita owners. We really hope you guys like it!