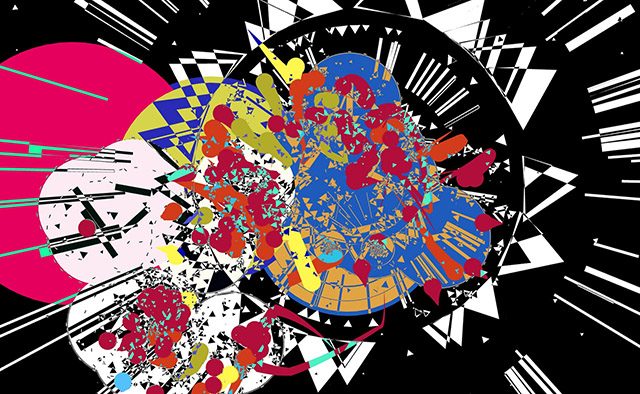 Hey, I’m Erlend Grefsrud, and I’m making Myriad on PS4 and PS Vita. It’s my first solo game, published by my company Bifrost Entertainment, and I’m responsible for everything except the music, courtesy of his reverberant majesty Mathias Rudsengen.

Myriad is a beatmatched crystallization of arcade aesthetics. It’s a game that grows more and more beautiful the better you play, where you make and break worlds, control time, and bend space — all for one thing: performance.

Myriad is purely about performance. It’s stark naked, with no story, no obvious meaning at all, just actions and consequences, crisp shapes and you. Everything springs out of your performance.

The game is pretty simple: defeat enemies to build the level you play in. But beware: defeating enemies only multiplies their numbers. Your goal is to blow up the level you built in a glorious chain reaction to clear it of enemies, upgrade your weapons — and do it again. Bigger and better.

As you progress, you make and break bigger and bigger worlds along with ever greater swarms of enemies. All the while, the soundtrack builds around your performance, punctuating events and swelling towards the next explosive crescendo.

You compete to deliver the highest-scoring performance. The current best is showcased right on the title screen where everyone can see it, thanks to Myriad’s replay system.

Every performance is recorded and can be rewinded, meaning Myriad lets you control time. You don’t restart when you die — you just rewind. No game over screen, no breaking the flow, just undo your mistake and keep performing.

Your highest-scoring performances are saved too, so you can share them and enjoy your friends’ best performances — and even participate in them. Any time you watch a replay, you can just resume playing. Myriad puts you in control and lets you carry on the performance.

Myriad is about giving you as much control as possible. You can control space as well as time: every circle can be picked up and moved, whether it’s an enemy or part of the level.

This is Myriad’s purpose: to open possibilities, yield control, get out of the way and let you play — I want your performance to be Myriad’s meaning.

I made it as beautiful as I could. Now it’s your turn to make it more so.