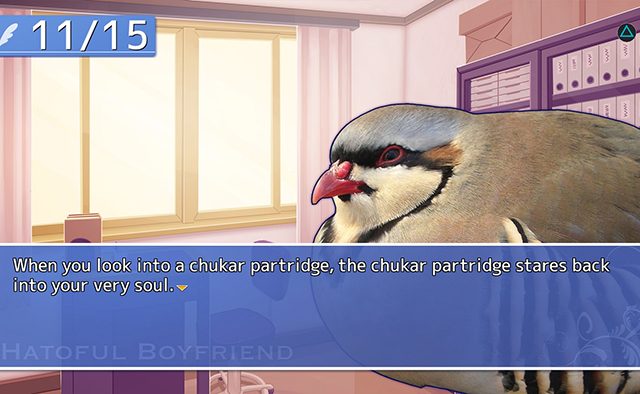 The teams at developer Mediatonic and publisher Devolver Digital are thrilled to announce that our remake of Hato Mao’s incomparable Hatoful Boyfriend will launch on PS4 and PS Vita on July 21st! Bird lovers around the world will be able to enjoy the romance of their avian suitors in luscious HD at home or on the go as Hatoful Boyfriend will be a cross buy title — grab it on PS4 or Vita and you’ll own it on both!

This new content means there is a whole new story path for longtime fans and new players to the series as well as a brand new ending. Explore questionable stalkers, bitter rivalries, and even doomsday devices in this exclusive new Hatoful Boyfriend content.

Keep tracking on all the news around Hatoful Boyfriend and the upcoming sequel Hatoful Boyfriend: Holiday Star, also due to arrive on PS4 and PS Vita later this year, by following @DevolverDigital and @Mediatonic on Twitter.