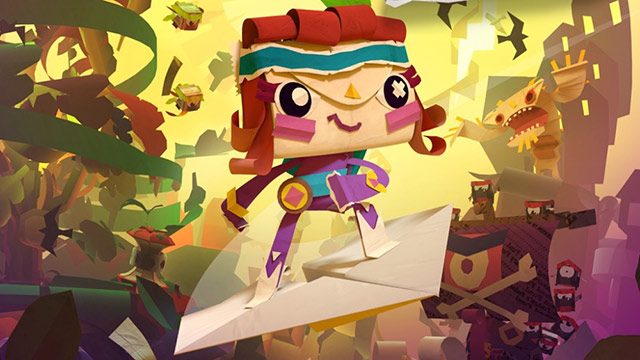 A world of brilliant colors, shapes, and an abundance of paper opens up once again. Tearaway Unfolded brings its unique charms to PS4 this week, enveloping players with crisp visuals and brand new controls.

Tearaway Unfolded is set in a world of paper. Everything, from puddles of water to radiant flowers, is exquisitely crafted in digital paper. Like its predecessor, Unfolded places players in control of an adorable papery messenger that travels over land and sea to deliver an important parcel to… the player. Yes, you, the player. What adventures await our loyal messenger and what’s hidden inside the letter? You’ll have to play to find out…

There’s lots more coming to the world of PlayStation this week, so read on — and enjoy the Drop!

A-JAX is a shooter released in 1987. Players play as special combat troops codenamed “A-Jax” with the goal of destroying an army of alien invaders. This work was ahead of its time using flashy sound effects and musical scores and was one of the first games ported to a consumer game console.

Ascendant is the unforgiving beat ’em up that challenges you with a new world each time you play. It utilizes a number of modern roguelike elements such as permadeath and procedurally generated environments.

Paris in the spring. Shots ring out from a gallery. A robbery… A murder… And the beginning of another epic Broken Sword adventure. Playing as intrepid American George Stobbart and sassy French journalist Nico Collard, you find yourself on the trail of a stolen painting.

FIFA 16 innovates across the entire pitch to deliver a balanced, authentic, and exciting football experience that lets you play your way, and compete at a higher level. And with all new ways to play.

In this action-puzzler with 60 targets spread throughout the five boroughs of New York City, players will use their cunning and brain power to plan raids and execute getaways to pull in the big bucks in the city that never sleeps.

This is the first time space battles occur not only in the depths of galaxies, but right inside cross-dimensional wormholes! Punch your way through waves and waves of enemies from all races in the universe as you travel through volatile and crazy wormholes.

Knock Knock is a pocket of chaos that serves as a direct contradiction to the belief that the world can be made sense of at all.

Leo’s Fortune is a platform adventure game where you hunt down the cunning and mysterious thief that stole your gold. Beautifully hand-crafted levels bring the story of Leo to life in this epic adventure.

Enjoy the original story of One Piece, from Fuschia village, where everything has started, to the kingdom of Dressrosa, a mysterious island dominated by the evil Donquixote Doflamingo.

Tearaway Unfolded invites you on a journey to help your plucky messenger make a very important delivery. Reach into your TV with your DualShock 4 to unleash gusts of wind to unfold hidden areas, confound enemies and ride a paper plane.