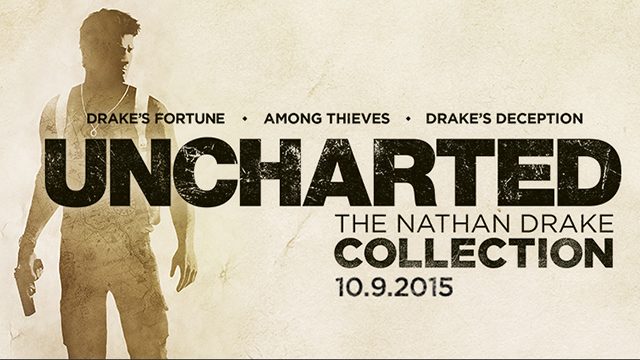 Nathan Drake has set foot on forgotten ruins, plundered ancient treasures, fought legions of pirates, and won a few hearts along the way. This Friday, the famed treasure hunter plunges into new light with Uncharted: The Nathan Drake Collection on PS4.

Experience a great life born of small beginnings. Uncharted: The Nathan Drake Collection includes all three single-player campaigns from the Uncharted series (Uncharted: Drake’s Fortune, Uncharted 2: Among Thieves, and Uncharted 3: Drake’s Deception). The collection has been beautifully remastered by the team at Bluepoint Games with enhanced visuals, gameplay improvements, and new modes. The new collection is also the only way to gain exclusive access to the Uncharted 4: A Thief’s End Multiplayer Beta (December 4th through 13th). It’s an exquisite collection for new globetrotters and seasoned explorers alike.

But that’s not the only sweeping adventure coming to PlayStation. The Star Wars Battlefront Beta opens this week on PS4! Wage war as both the Rebels and Imperials in three different modes across iconic Star Wars vistas.

For a full list of games coming to PlayStation this week, read on. And enjoy the Drop!

Get ready for a dream duel of epic proportions in Dengeki Bunko: Fighting Climax, a 2D fighting game featuring an all-star cast of popular characters from Dengeki Bunko novels set against Sega-themed worlds.

Form an alliance and get revenge in the latest SRPG in the Disgaea franchise. Killia, a loner, is drawn into forming a rebel army with a group of Overlords to oppose Demon Emperor Void Dark, and prevent him from taking over all of the Netherworlds.

Winner of over 130 Game of the Year awards, discover the definitive Dragon Age: Inquisition experience. The Game of the Year Edition includes the critically acclaimed game, Jaws of Hakkon, The Descent, and Trespasser — and added features.

Develop and grow your farm across a huge, dynamic landscape. Farming Simulator 16 invites you to enter the world of a modern day farmer: perform duties including animal husbandry, planting, harvesting, and trading crops.

Onigiri is a MMORPG where you can use various types of weapons to combat monsters. In a fantastic world that mixes history and fairytales, the story will take you and your companions through an exciting journey.

Ride the best bikes in the world currently in production, and the most popular models from the past, choosing from 14 different manufacturers.

The long awaited return of Saint Seiya is here with Saint Seiya Soldiers’ Soul! It leverages the power of the new generation consoles for spectacular graphics, more robust gameplay, and intense battles.

Enter the battle! This Beta is a technical test and will give Rebels and Imperials alike just a small taste of the Star Wars battles you can expect to live out when the game launches on November 17th.

Take it outside for the fastest action ever on the court! Use quick reflexes and split-second timing to win the game and unlock new courts and characters.

Super Meat Boy is a tough as nails platformer where you play as an animated cube of meat who’s trying to save his girlfriend (who happens to be made of bandages) from an evil fetus in a jar wearing a tux.

The Transformers are back, and this time they’re in the hands of acclaimed developer PlatinumGames who has married over-the-top brawler action with comic book inspired art.

From the groundbreaking storytellers at Naughty Dog comes the genre-defining epic that revolutionized adventure storytelling, rebuilt by Bluepoint Games with the power of PS4. Experience one of the most revered game series of all time as you follow the perilous journey of Nathan Drake across the globe.