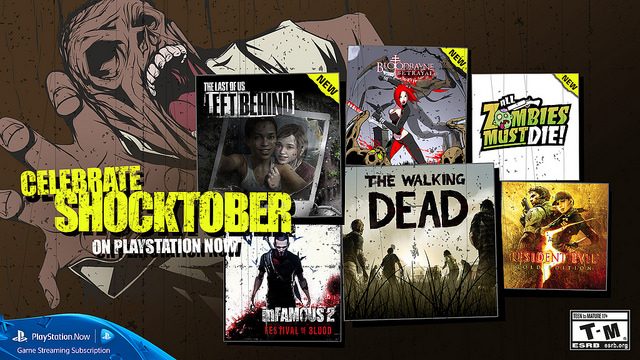 SHOCKTOBER will be a month like no other on the PlayStation Now Game Streaming Subscription service. Thirteen dangerously fun games will be unleashed on the subscription service on Tuesday, October 6th to get your Halloween celebrations started with a bang! We also hope to resurrect your interest in fifteen other frightfully good games already haunting the service, so be sure to check some of the existing games in the service as well.

Here’s a video showcasing 6 SHOCKTOBER Games (3 new, 3 existing) to show you just a bit of the good stuff within the PlayStation Now subscription games library.

The Last of Us: Left Behind

The Last of Us: Left Behind combines themes of survival, loyalty and love with tense, survival-action gameplay in this critically acclaimed chapter to the best-selling game, The Last of Us. Play through the poignant story of Ellie and Riley as they use firearms, improvised weapons and stealth to defend against hostile humans and zombie-like creatures. (Rated Mature)

Slay ghastly enemies as Rayne, the original video game femme fatale with superhuman strength, speed, and agility in this 2D side-scrolling hack-n-slash adventure. With the help of a mysterious friend and members of Brimstone, Rayne must take out a fiendish horde and stop an evil master plot once and for all. (Rated Teen)

All Zombies Must Die!

You’re all that stands between 6 billion zombies and the world’s supply of delicious, supple head-candy. It’s you versus an unrelenting, undead army in this non-stop zombie-fighting romp, so reload your shotguns and lock up your brains: All Zombies Must Die! (Rated Teen)

Capture the souls of 7,000 demon spawn in a deal with Death to win reunion with your wife in this first-person shooter. Weapons include the eponymous Painkiller, as well as the Stakethrower, Electrodriver and the new Soulcatcher, which shoots saw blades and sucks the souls from enemies. (Rated Mature)

Indulge your dark side and step into the role of the Devil’s Daughter as you mercilessly trap human victims on a quest for retribution. With over 120 traps to choose from, you’ll get to place ever more elaborate, sadistic and humiliating combos in this trap-based strategy game. (Rated Mature)

Slender: The Arrival is a survival-horror game adaptation of “Slender Man.” Its unadulterated use of tension and fear will keep you in its grasp long after you’re done playing the game. (Rated Teen)

Collect candy and costumes to thwart the plans of Dr. Orel White, the nefarious dentist who wishes to see Halloween banished forever. Take on the powers of the costumes you wear in this whimsical, well-heeled role-playing game. (Rated Everyone 10+)

Stick it to The Man

On an ordinary day, hard hat tester Ray has a bizarre accident and wakes up with a giant pink spaghetti arm sticking out of his brain, giving him extraordinary mind-reading powers. What more do you really need to know to want to play this game? (Rated Teen)

In this post-apocalyptic retro-styled 2D survival horror game, you’ll control a nameless protagonist based on directions provided by the character’s apparent hallucinations. Lone Survivor’s gameplay, storyline, and multiple endings will keep you coming back for more — even after Halloween has come and gone. (Rated Teen)

Play as a vampire-hunter turned vampire in this hack-n-slash game featuring platformer and RPG elements. You’ll have to off against human outlaws, demons, werewolves and other vampires before you secure the Blood Seal and reclaim your honor. (Rated Mature)

Embark in life-or-death battles with evil ghosts that lurk in the darkness of Tokyo in this mash-up of adventure, visual novel gameplay and strategy RPG elements. Treat yourself to the not-to-be-missed art-style, character animations, backgrounds and story! (Rated Teen)

Final Exam is an action-packed side-scroller, drenched in the blood and caustic humor. Test your mettle in this wild mash-up of monsters, baseball bats, chainsaws, and references to video games and teen horror movies! (Rated Teen)

Unleash zombie hordes in this “fun, funny and original” RTS game — where you control the zombies. The fun only ends when all of your zombie squads are eliminated. (Rated Teen)

Play as Lee Everett, a convicted criminal who has been given a second chance at life in a world devastated by the undead. With corpses returning to life and survivors stopping at nothing to maintain their own safety, protecting an orphaned girl named Clementine may offer him redemption in a world gone to hell. Play the Complete First Season, which includes all five episodes and the “400 Days” DLC. (Rated Mature)

Experience the thrill and terror of the Resident Evil franchise like never before with the Resident Evil 5 Gold Edition. Featuring Chris Redfield of the original Resident Evil and new partner Sheva Alomar, a West African agent of the Bioterrorism Security Assessment Alliance (BSAA), this sci-fi action, survival game is packed with hordes of fast-moving, quick-thinking enemies that represent a whole new breed of unimaginable undead evil. (Rated Mature)

Vampires swarm New Marais, and revered superhero Cole MacGrath has been bitten. Explore the darker side of the inFAMOUS universe as Cole races against the clock to find and kill the head vampire to save his soul and city. (Rated Teen)

Enslaved: Odyssey to the West

Escape or die in this vividly rendered post-apocalyptic cinematic masterpiece, co-directed by Andy Serkis (Lord of the Rings, King Kong). Think on your feet and choose your path to battle through the perilous environmental and deadly enemy obstacles that wait at every turn. (Rated Teen)

Alone in the Dark: Inferno

Take on the role of paranormal investigator Edward Carnby who, over the course of one apocalyptic night, must fight to survive and uncover the earth-shattering secret behind New York’s Central Park. Intense storytelling and unprecedented environmental interaction await you in this thrilling apocalyptic survival horror game. (Rated Mature)

Taking on the role of War, one of the Four Horsemen of the Apocalypse in this action role-playing hack-n-slash game. Fight angels and demons with your two-handed sword, Chaoseater, or wickedly powerful Scythe— or tear enemies apart with your own two hands! (Rated Mature)

Darksiders II follows the exploits of Death, one of the Four Horsemen of the Apocalypse, in the follow-up game that runs parallel to the events in the original Darksiders game. This epic journey propels Death across an expansive world as he tries to redeem his brother, War, the horseman blamed for prematurely starting the Apocalypse in Darksiders. (Rated Mature)

Evade terrifying ‘Shibito’—reanimated corpses that retain a sense of intelligence and personality—in this stealthy survival-horror game. Your mission is not only to stay alive and protect others as you play through as twelve distinct yet interconnected characters as they try to survive a cursed village. (Rated Mature)

Experience action role-playing survival-horror gameplay at its finest as you fight melee-style to survive a zombie-infested open-world island. Earn experience and level-up your character to gain health, stamina and skills to give yourself a fighting chance against the zombie hoard. (Rated Mature)

Dead Island Riptide takes players to the island of Palanai on the Banoi archipelago, infested with bloodthirsty zombies and only a few remaining Survivors still fighting for their lives. With new terrifying enemies, deadly weapons, a new playable character and much more, Dead Island Riptide will draw you back into a world that has grown corrupt – with the last rays of hope vanishing in rising tides. (Rated Mature)

Play the role of Overlord in this dark and satirical action-adventure game, where your goal is to destroy or conquer the land by commanding hordes of small creatures known as “Minions.” Operate siege weapons, attack boats, war machines and even take direct control over the strongest minion in your minion horde to lead the rest through the use of the “Possession Stone.” (Rated Teen)

Get immersed in twisted parodies of classic fantasy scenarios and characters and revel in the black humor and dark irony of Overlord: Raising Hell. Play dirty tricks on anything that moves and unleash your horde of slavishly loyal rascals to become even more powerful. Be evil… or really evil with Overlord – it’s time to raise hell. (Rated Teen)

When your character falls under the spell of a demonic influence, you must choose between the evil powers that are offered or rejecting them in favor of developing heroic talents. Your decisions will bear heavy consequences, so will you struggle to keep your humanity or will you be tempted by the demon’s power and let it take over? (Rated Mature)

The earth has been struck by a mysterious purple beam of light, and everyone touched by it has turned into a giant zombie. You are the chosen one and it is up to you to rescue the last survivors on earth by leading them to safety through zombie-infested streets. With a classic arcade style overhead view, make your way through detailed real-world cities and use your heat vision to find people hiding in buildings. Then lead them to the Escape Zone before time runs out in this frantic, addictive game. (Rated Everyone 10+)

We hope you get to play all of the 13 new SHOCKTOBER games and explore the ever-expanding library of 150+ games on the PlayStation Now subscription service. Click here to start your 7-Day FREE Trial.