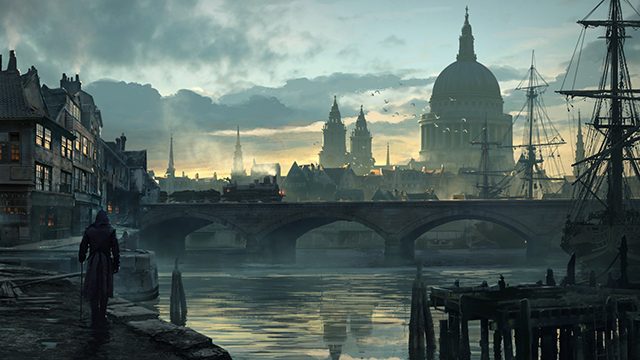 Assassins, overlords, rock stars, and heroes — this week’s lineup of new games is brimming with all sorts of characters, and you’ve come to the right place for details.

Ubisoft’s massive stealth series continues this week with Assassin’s Creed Syndicate on PS4. Travel to London during the Industrial Revolution and lead a desperate working class against their tyrannical overseers. Form the first organized crime family as a team of sibling assassins, and look good doing it.

And for those about to rock, well, we salute you, too. Guitar Hero Live launches this week on PS4 and PS3, bringing the iconic rock ‘n’ roll experience back to PlayStation with real crowds that react to your performance.

That’s just the start of this week’s stellar lineup, so read below for the full list. And enjoy the Drop!

What time is it? It’s time to crack a case! Adventure Time: Finn and Jake Investigations is an all-new, story-driven graphic adventure game.

Cosmo Police Galivan is an action game that was released by Nichibutsu in 1985. Players transform into Galivan to destroy the criminal organization Aku.

London, 1868. The Industrial Revolution unleashes an age of invention, transforming the lives of millions with technologies once thought impossible. But industrialization only fattens the purses of a privileged few, while workers struggle to survive in the factories that make London the beating heart of the global economy — until an Assassin rallies to their defense.

Play as Cardia, a beautiful young woman whose poisonous touch means imminent death, and unravel the secrets of her past with the help of five charming guys.

Forced is a challenging one- to four-player co-op action RPG with puzzle and tactical elements. You are cast as slaves in the toughest fantasy gladiator school of them all, condemned to fight to the death, all the while attempting to win your freedom.

One game, two ways to play. The first mode, GH Live, lets you rock real reactive live action crowds and delivers the full emotional roller coaster of being on stage. The second mode, GHTV, is the world’s first playable music video network that lets you play along to official music videos and compete against friends.

No camera? No problem. No additional hardware is required! Download the Just Dance Controller app to your iOS or Android device to turn your smartphone into a controller to play up to 6 players.

Organ Trail is a retro zombie survival game. Travel westward in a station wagon with 4 of your friends, scavenging for supplies and fending off the undead.

Step into the warped fantasy world of Overlord: Fellowship of Evil, the dark and twisted action RPG filled with the series’ signature black humor.

Two nations fight for supremacy and the fate of the realm lies in the hands of Sorey, an inquisitive young adventurer who takes on the burden of becoming the Shepherd, the one the legends foretold would become the savior of all.