LittleBigPlanet 3: Back to the Future Arrives Today! 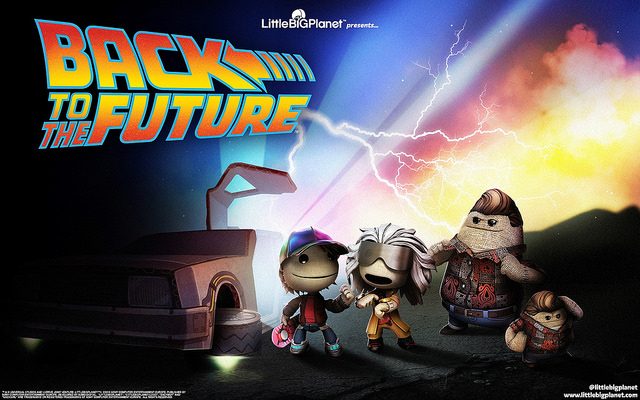 It’s October 21st, 2015 today and Sackboy has a brand new adventure in the Back to the Future Level Kit.

A Brand New Level for Sackboy, Marty, and Doc!

Sackboy joins Marty and Doc in 1955 for an exciting journey across Hill Valley! They work together to travel through time via temporary temporal portals to collect the items they need to power-up the DeLorean Time Machine. The mission? Give it enough power to return them all back to the future!

It’s always a race against time with Marty and Doc, so you’re going to need the help of a Hoverboard to help speed across each time period of Hill Valley and showcase your hoverboarding skills by grinding across rails.

3 New Back to the Future Costumes

Any good time-traveller needs to learn how to blend into their environment, and what better way to blend in with the cast of Back to the Future than a collection of costumes based on Marty McFly’s 2015 clothing, Doc Brown’s 2015 clothing, and Biff Tannen’s 1955 clothing?

Bring your levels to life with two of Back to the Future themed music tracks and a Sound Object filled with new sound effects to add to your creations.

Decorate your latest creation with a Back to the Future background based on Doc’s Garage. We couldn’t think of a better place for Sackfolk to craft and tinker away on new creations!

An assortment of goodies straight from the workshop of Doc Brown to help you invent your own Back to the Future themed creations!

Our first costume pack includes all of your favourite characters from Hill Valley in 1985 including Marty McFly, Doc Brown, Jennifer Parker, and Biff Tannen. Each of these costumes are available for individual purchase or as part of the full Back to the Future Costume Pack 1 (1985), purchase the entire costume pack and you will also get a bonus costume for OddSock of the world’s first ever time-traveller… Einstein!

Our second Back to the Future Costume Pack goes back to Hill Valley 1885 and features a series of costumes based on this time period including some suitably wild west costumes for Marty and Doc, along with costumes for Clara Clayton and Buford “Mad Dog” Tannen.

OddSock gets another bonus costume in the complete Back to the Future Costume Pack 2 (1885) that will allow them to dress up as Doc Brown’s loyal companion from 1955… Copernicus!