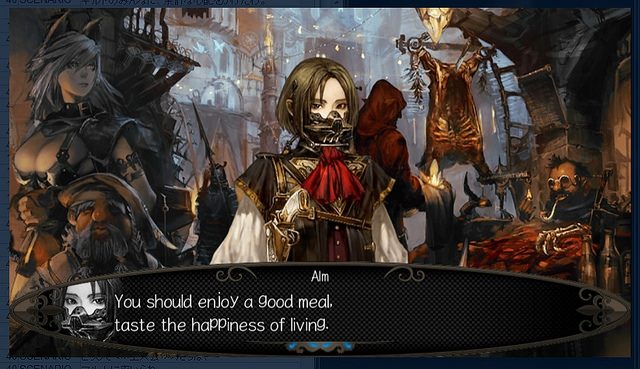 Hey there, dood! It’s been a bit since I’ve been around these parts, but I’m here to introduce you to an awesome RPG on PS Vita from Japan — Stranger of Sword City — which you’ll be able to dive into on March 22nd, 2016! I even managed to snag some screenshots from our current development build of the game.

After surviving a mysterious plane crash, you wake to an unfamiliar land lit by stars you’ve never seen. This land is Escario, the city of swords. Quickly marked as the Chosen One, the Stranger of Sword City, you must defend this place and choose your allegiances carefully as you scour the land for a way home. And that’s how your adventure begins.

Stranger of Sword City, at its core, is a game about death and the struggle to avoid vanishing forever. Like previous Experience, Inc. titles, you’ll be able to customize your team through a ton of character creation options — everything from their age (which affects how many times they can die before vanishing, and how many stat points they get to allocate) to the RPG mainstays of race (Migmy FTW!), talent, class, and more.

Experience, Inc. has changed up the dungeon crawler formula a bit by incorporating a few cool systems that are sure to keep you elbow-deep in the dungeons of this harrowing Japanese dark fantasy title.

Decisions to be Made

The choices you make in Stranger of Sword City will affect how you play, as allying yourself with different factions will unlock different skills and benefits for your party members. You’ll have to carefully consider if you’ll be throwing your support behind the mysterious Strangers Guild, gambling on the shifty Medell Co. to help you out, or running the straight and narrow with the city’s defenders in the Kingdom.

Each step of the way on your journey will offer risk and reward as you build rapport with each group in order to maximize your chances of surviving and finding your way home.

Then, Out of Nowhere!

Speaking of risk and reward, Stranger of Sword City features a unique Ambush system that will put your life on the line to earn the greatest loot. As the name implies, this system lets you observe your enemies before jumping into battle when the perfect opportunity presents itself.

Using the Ambush system, you’ll have a chance to encounter unique enemies, and get a helpful glimpse at the loot they’re transporting! Careful though, you’ll be vulnerable to enemy ambushes as well if you wait too long in search of the best gear.

You Want a Challenge?

Ever told your brother how awesome the team you built in your game was, only to have him try to one-up you with how fast he cleared the game? No? Hm, well, I certainly have and I hate my brother thinking he’s better than me, so I’m super pumped for the leaderboard system that Experience has added!

It lets you rank and compare yourself against other players across more than 40 categories, including everything from level clear time to party and item strength. So you’ll want to take advantage of that Ambush system if you want to reach the top of the charts.

You’ll be able to explore all the features of Stranger of Sword City when it launches digitally and at retail on March 22nd, 2016. Until then, join us on our Twitch channel next Tuesday, Dec 22nd at 5:30 PM Pacific for the first live look at the English version of the game, or swing by the game’s official website to learn more right now!