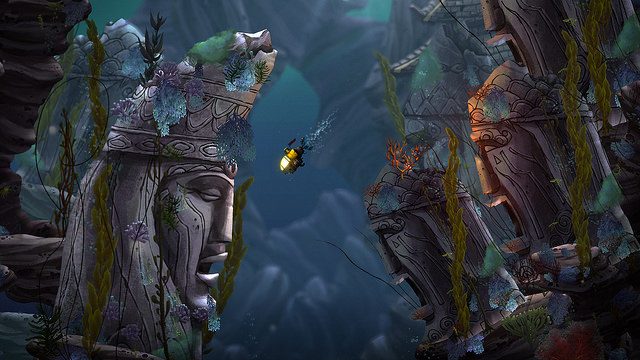 With a terrible dream echoing in your mind and the comfort of old songs pushing you onward, dive into the deep unknown in search of your lost father. Song of the Deep, a new adventure from the creators of Ratchet & Clank, is coming to PS4.

In Song of the Deep, players control the brave Merryn as she journeys into the ocean in a rickety submarine. Face fearsome creatures and survive dangerous environments as you upgrade Merryn’s submarine to reach deeper into the cavernous depths. With gorgeous visuals, non-linear play, and a gripping story, Song of the Deep will speak to any lover of classic adventures.

For a full list of new games coming to PlayStation this week, read on. And enjoy the Drop!

Adrift is an immersive first-person experience that tells the story of an astronaut in peril. Floating silently amongst the wreckage of a destroyed space station with no memory and a severely damaged EVA suit slowly leaking oxygen, the only survivor struggles to determine the cause of the catastrophic event that took the lives of everyone on board.

Gradius II is a shooter released by Konami in 1988. Players take control of the super dimension fighter Vic Viper in order to protect planet Gradius from the Gofer special forces. Gradius II is considered the best in the Gradius series and has played a pivotal role in the history of shooters.

A classic reawakens — Assault Suit Leynos is back and in high definition! Get ready for all-out robotic war as the fan favorite Genesis classic is reworked with all new HD visuals for the ultimate alien-blasting experience.

Shoot your way through the hauntingly beautiful remains of Earth. Created by Roland Studios, a one-man indie development house, Daydreamer is an homage to 16-bit era side-scrolling shooters. Coupled with strategic platforming, high intensity battles, and pets that aid in combat, you wouldn’t want to wake up from this dream.

Explore, fight, talk, and hack your way through a rich cyberpunk world in this 2D action-RPG! Wanted dead by a mysterious and tentacular organization, you will traverse the futuristic city of Harbor Prime and make unexpected allies on your quest to bring down the system!

Grab your Proton Pack and join the Ghostbusters as you explore Manhattan, blasting ghosts, and trapping those runaway ghouls.

Kill Strain is a top-down, competitive twin-stick action shooter with a monumental twist where three teams are pitted against each other for domination. Featuring innovative 5v5v2 gameplay, two teams of five players battle to contain-and-control a mysterious and powerful energy source codenamed ‘The Strain’ that has been discovered in research facilities.

Who said rocket science wasn’t for everybody! Kerbal Space Program puts you in charge of the recently launched space program for a fun and clever alien race — the Kerbals. These little guys are counting on you to build spaceships, rockets, and vehicles that can take off and hold on during space travel missions, without hurting them in the process…

Last Wings is a fast and dynamic air combat game, developed in a mixed environment between 2D and 3D. Play alone or in a team of up to 4 players on local mode, but if you prefer, start a battle on online mode with up to 10 players and challenge the greatest competitors of this war.

MilitAnt is an action-packed side-scrolling platform/shooter. Set in a world ruled by insects, a lone soldier ant must defend his home colony at all costs from a brutal invasion by the termite infantry, the wasp airforce, and other enemy bug nations.

Since 1978, the Gundam franchise has undoubtedly become a spearhead series in the Japanese animation landscape. Considered as a real icon in Japan, the TV anime has led to numerous best-selling toys, movies, comics… and even a giant statue in Tokyo! Prepare for a clash of the eras as these powerful Mobile Suits are heading West with a brand new game: Mobile Suit Gundam: Extreme VS-Force.

Help Panda survive the coming cold in this new exciting game! Grab on to the snowboard and ride to stunning adventures all over the world. It’s snowing everywhere, so Panda can easily hit the slopes of Egyptian Pyramids or the hills of sunny Italy. Unlock new boards, perform tricks, and break through to new records!

One of the most popular Resident Evil games comes to PS4 with enhanced visuals. Featuring single-player and co-op modes and a dramatic storyline, this fully-loaded release includes all previously released DLC (Lost in Nightmares and Desperate Escape story expansions, Versus mode, extra figures, and 4 costumes), and the previously PC-exclusive No Mercy mode.

Song of the Deep
PS4 — Digital

Song of the Deep is a metroidvania-style action-adventure game following a young girl’s quest into the unknown to find her missing father. Combining discovery, skill, and suspense with an unforgettable narrative, this underwater journey will challenge players to explore, experiment, and skillfully navigate a vast ocean landscape.

Three fleets of spaceships flee a doomed Earth carrying the last humans in cryostasis. Pursued by aliens, it’s up to the lowly security droids to save humanity. Taking up arms solo or with a friend, you must dance with death in a brutal and addictive arcade platformer shooter inspired by Super Crate Box and stuffed to the brim with unlockables.

Immerse yourself in this fascinating and unique experience to uncover the history and secrets of fonts and characters! Control two dots and travel through the ages of typographic styles and techniques. From the rock paintings of prehistoric times to Pixel art of the 2000’s, solve all the riddles by riding the most popular fonts and characters in a captivating musical and visual environment.

Videoball is a sport everyone can play. We researched basketball, football, soccer, first-person shooters, and real-time strategy games. Videoball is a compact expression of all sports’ mechanics. Score points in order to win. Win in order to Feel Real Good.