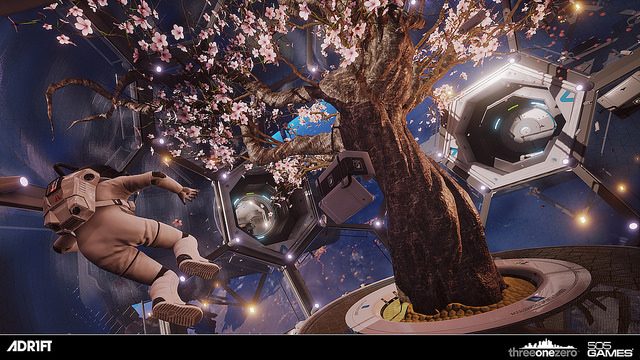 Hey everyone, my name is Adam Orth. I’m the CEO/Creative Director at Three One Zero. We are so excited to announce that Adrift is releasing for PS4 on PlayStation Store in North America and Europe on July 15.

From the very beginning, our dream was to release Adrift as a PS4 title. My partner Omar Aziz and I sat in a tiny office at a shared desk in Santa Monica, CA and plotted out exactly how to get to this point. It feels incredible to have finally achieved it. We can’t wait for you to experience the game.

I’ve prepared an Adrift FAQ to get everyone up to speed on the game ahead of launch:

What is Adrift?
Adrift is a non-violent, narrative-driven FPX (first-person experience) where the focus is exploration, environment, narrative, and light game mechanics. Our small independent team is made up of veteran AAA game developers. We’ve collectively worked on many AAA shooters, so the idea of making a non-violent FPX was something really exciting to us and a challenge we immersed ourselves in as developers.

What kind of game is Adrift?
Adrift is hard to categorize, but it has a little bit of a lot of things. There’s action, simulation, exploration, mechanics, objectives, puzzles and storytelling. Mostly, we like to think of Adrift as an experience and a meditation revolving around the fantasy of an astronaut in peril.
Many people use the film Gravity as a comparison, but Adrift is actually closer to the films 2001: A Space Odyssey and Moon in terms of experience, tone and theme.

What other games is Adrift similar to?
If you enjoy games like Firewatch, The Vanishing of Ethan Carter, Everybody’s Gone to the Rapture, Gone Home, Dear Esther and Proteus, we think you will appreciate and love Adrift.

Will there be a physical/retail version of Adrift?
Currently, there are no plans for physical or retail.

How long is Adrift?
An average playthrough of Adrift is 4 hours. It can be shorter or longer, depending on the amount of exploring you do.

What is Adrift about?
Adrift is the story of Commander Alex Oshima who wakes up floating amongst the debris of the destroyed Northstar IV space station with no memory of who she is or of the catastrophic event that took the lives of her crew and a badly damaged EVA suit slowly leaking oxygen.

What do you do in Adrift?
As the only survivor, your goals in Adrift are simply to stay alive and get home safely.
You accomplish this by exploring the wreckage of the Northstar IV in zero gravity, searching for oxygen resources, repairing your damaged EVA suit and re-activating the station’s 4 core system mainframes in order to be able to operate and launch the station’s EEV escape craft.

How is the story told in Adrift?
Just like the Northstar IV station, your EVA suit, and Alex Oshima herself, the story/narrative in Adrift is broken. It’s meant to be discovered as seeds that give you brief glimpses into the lives of Alex and the crew members who did not survive. These seeds allow you grow and create your own version of the story. There is no real, traditional game story structure. It’s up to you to hunt down as much or as little as you like as you explore the wreckage.

How was Adrift created?
Adrift was created using Unreal Engine 4.

Are there multiple endings in Adrift?
Yes.

Do your actions in-game affect the outcome of Adrift?
Absolutely.

Are there multiple gameplay modes in Adrift?
Yes. In addition to the single player experience, Adrift also features:

Are there Trophies in Adrift?
Absolutely!

Who created the music for Adrift?
Adrift utilizes several well-known classical piano pieces that were performed by Brian Bell of Weezer and features several original music pieces composed and performed by Adam Orth.

What can I expect from Adrift?
Our goal for Adrift is to give you the ultimate astronaut-in-peril fantasy. We want to blow you away with stunning visuals, challenge you with zero-g movement and physics, scare you with the danger of space and most importantly: tell you an emotional story about human characters within a rich, deep universe and fiction.

Adrift launches on July 15. We hope you love it. Good luck out there, commander…