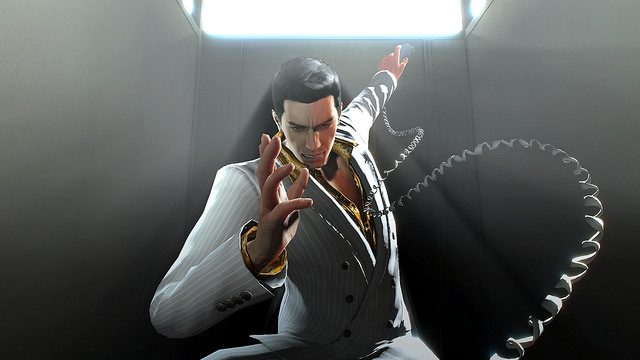 Give your shoes a pump, set your pager to vibrate, and get ready to crank your Walkman, because Yakuza 0 has a release date — you’ll be able to introduce street thugs’ faces to the exquisite pavement of Kamurocho on January 24, 2017, exclusively on PS4 in North America and Europe. (That lead sentence was full of eighties references, since Yakuza 0 takes place in 1988.)

If you’ve only heard some friends shout “Play Yakuza!” from the rooftops of the internet, Yakuza 0 is the perfect game to get into the series. Yakuza 0 is a prequel to all the previous games, where our grizzled yakuza-with-a-heart-of-gold protagonist, Kazuma Kiryu, is a bright-eyed 20-year-old, fresh into the game. Meanwhile, Goro Majima, the guy with the snake-skin jacket and the hot streak of insanity, is a suave and calculated owner of a cabaret. He actually wants to get back into the yakuza.

But let’s back it up a step or six. I’m Scott Strichart, the localization producer on the game, and I wanted to tell you about some of the ways we’re taking this game’s localization to the next level.

I’ll start with saying that, for the first time since Yakuza 2 back on PS2, we’re actually putting all the chapter titles, character introductions, opponent names, and on-screen directions in English, instead of just subtitling the kanji. This might seem like a pretty small change, but I think when you get to play the game, you’ll really feel the difference!

Secondly, and this is sometimes controversial, but hear me out — we’re maintaining general-use honorifics in the English script. We’re leaving the original Japanese voices intact for the authenticity that only a Japanese voice actor could bring to a yakuza experience, so we took the opportunity to bring the subtitles you’re reading closer to what you’re actually hearing the characters say. Beyond just marrying the subtitles to the spoken word, the honorifics actually play a pretty important role in understanding the respect (or lack thereof) characters have for each other. I think you’ll really see how much more this adds to the story when you get to play it!

Lastly, with this game rewinding to the origins of the series, this was also a chance for us to hit the reset button on the way we refer to the yakuza ranks. Yakuza 0 is going to show you how a power struggle inside a criminal organization looks, and I’ll tell right now, it ain’t pretty.

Of course, whenever you need a break from all this heavy stuff, Yakuza 0 — like the rest of the games before it — delivers plenty of diversions. You can race pocket cars, manage your side businesses, hit the dance floor or the pool hall, go get a drink, chat up girls on the telephone, and much, much more.

Once again, Yakuza 0 is coming January 24 in physical and digital edition. For more information, check out our fresh-outta-the-takoyaki-pan website we just launched, and pre-order today from participating retailers to show this incredible series a little love!