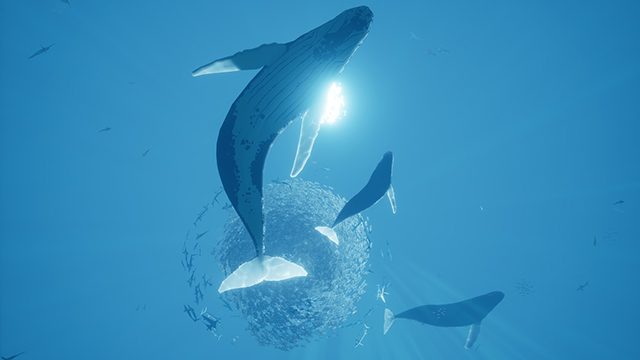 A lone diver plunges into the dark reaches of the ocean in search of answers. With untold beauty and terrible danger drifting through the waters, the diver will uncover the truth of the world. Abzu launches this week on PS4.

Developed by the team at Giant Squid, Abzu explores the beauty of the ocean with free-flowing gameplay and incredible visuals. Seek out answers, or luxuriate in the wonders of life beneath the waves. If you enjoy games like Flower or Journey, Abzu was made just for you.

But that’s only the beginning of this week’s lineup! Puzzle fans, prepare: Tricky Towers hits PS4 this week, and it’s free for PS Plus members! Build up a mighty tower faster than your opponents and use spells to disrupt their game. With single-player challenges and multiplayer support, Tricky Towers will keep you playing.

Download at PlayStation Store
From the artistic mind behind Journey, Abzu is a beautiful underwater adventure that evokes the dream of diving. Immerse yourself in a vibrant hidden world bursting with color and life as you descend into the heart of the ocean.

Download at PlayStation Store
Enter the fractured psyche of Bruce Wayne and discover the powerful and far-reaching consequences of your choices as the Dark Knight. In this gritty and violent new story you’ll make discoveries that will shatter Bruce Wayne’s world, and the already fragile stability of a corrupt Gotham City.

Download at PlayStation Store
Pilot an airship, command powerful weapon emplacements like cannons, giant flamethrowers, and high-powered lasers. Destroy the very earth from under your enemies’ feet! Cannon Brawl is an exciting mix of RTS and artillery gameplay. It’s a whole new genre in strategy games!

Download at PlayStation Store
When Houdai is shot by cupid angel Ekoro, he becomes immensely popular and suddenly every girl at the academy becomes hot for him. But being irresistible is hardly a dream come true! Every love letter, shout of adulation, and advancing kisses drains his energy! And worse — if he doesn’t find his one true love by the end of the day, he will become cursed and forever alone!

Download at PlayStation Store
Join the Laser Disco Defenders on their quest to defeat the evil Lord Monotone and prevent him from using the coveted Mirror Moon to force the galaxy into dancing along to his, and only his, tune. In this self-inflicted bullet hell you must stay on your toes as each laser beam fired ricochets off walls and can hit you too!

Nightmares from the Deep: The Cursed Heart
PS4 — Digital

Download at PlayStation Store
Nightmares from the Deep is a classic adventure game that tells a gripping tale of undying love. Assume the role of museum curator Sarah Black and take control of your destiny to stop the undead Captain Remington and save your daughter’s life.

Download at PlayStation Store
Overcooked is a chaotic couch co-op cooking game for one to four players. Working as a team, you and your fellow chefs must prepare, cook, and serve up a variety of tasty orders before the baying customers storm out in a huff.

Download at PlayStation Store
Lead your troops to victory with Risk Urban Assault! In a post-apocalyptic world, rally your armies and march across some of the most famous cities around the globe. From Shanghai to New York, be cunning and play strategically to defeat your opponents.

Download at PlayStation Store
With your brilliant robe and magic powers, it’s time to build some Tricky Towers! Stack your bricks to create a stable tower and try to topple those of your opponents. Cast magic to support your structure and fend off the dark spells of your rivals in this frantic physics party game.