So How Did Crash Bandicoot Wind Up in Skylanders Imaginators on PS4? 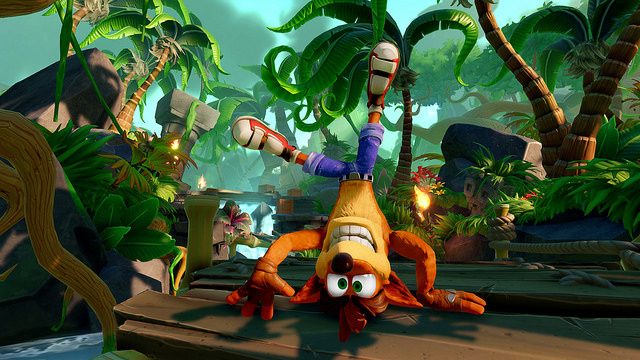 By now, the world has learned all about Crash Bandicoot’s triumphant return to consoles to celebrate his 20th anniversary. Not only are three of his original adventures getting a candy-coated HD makeover, but his royal Cootness will also appear as a special guest star and fully-playable toy in the new Skylanders Imaginators game launching October 16 on PS4.

Now, some folks might look at the toy as a swell way to celebrate this momentous occasion and call it enough. At Vicarious Visions, we looked at “enough” and we said “Nay! We will do more!” (We didn’t say that at all, really. It mostly involved looking at schedules, and manpower, and spreadsheets, and then having some meetings until we reached a sensible decision… but who wants to read that blog.)

In the end, we knew that the appetite for Crash was so great that “enough” would never suffice. We needed to lay out a veritable smorgasbord of delicious treats for fans to gorge on ’til their eyes popped out from fun-gluttony.

So, we decided to create a brand new Crash Bandicoot-inspired adventure for Skylanders Imaginators.

We had to create something that would not only resonate with the hardcore fans who grew up with Crash, but also gracefully introduce him to the new generation waiting to discover him in the Skylanders universe. We ran the risk of either creating a love letter to the original Crash games that would be so packed with inside jokes and references that it would be incomprehensible to a new player (much less a six-year old), or swinging the pendulum too far in the other direction to create something that felt so alien to the fan base that they dismissed it out of hand.

Fortunately, we knew the vehicle for delivery: an all-new, Crash-themed level. Offering new adventures has been core to the Skylanders experience from the very start, so giving Crash his very own level was a no-brainer. The question that remained was, what sort of adventure?

Our early prototypes were heavily inspired by the original Crash Bandicoot trilogy. They had a lot of third-person platforming, side-scrolling sections, rage-inducing chase sequences, etc. We knew we had to call back to all of the classic Crash experiences, but we still needed to find that core hook for a unique level that would feel at home in Crash’s world.

The solution to this conundrum arrived (as all good things do) with its own musical accompaniment.

The original Crash Bandicoot soundtrack is a treasure trove of awesomeness. It’s an upbeat and memorable score that matches Crash’s personality and gives him plenty of opportunity to show-off his mad dance skills. Fortunately, we have a long history with music and music-inspired gameplay. Thanks to our amazing sound department and some rhythmically-blessed developers, we had already done some early explorations in Skylanders, where we had slivers of gameplay match the beat of the music that was playing.

So, we decided to pitch the idea of an entire rhythmic adventure where the music, environment, and all its denizens move to the beat of the Crash Bandicoot soundtrack. It wouldn’t just be a party at the Wumpa Islands. The Wumpa Islands would become the party!

Pretty soon, everyone from top to bottom had signed off on the concept. There was a lot of excitement! We just had to figure out how to deliver on this thing we’d never really done before, and, you know, not disappoint the entire fan base.

Welcome to the Great Synchronization Celebration

The Synchronization Celebration came about as a sort of meta-nod to Crash’s long history. It is a very special event, conveniently scheduled to occur once every 20 years, where everything on the island moves in sync with the powerful rhythmic energies of the Wumpa Islands.

Guests from all over (including Skylands!) are invited to join in this rare celebration and partake in the dancing, frivolity, and piles and piles of cake. But with Crash coming back to celebrate his triumphant return, it wouldn’t be long before an old enemy decided to rear his giant, misshapen head to attempt to steal some of that Bandicoot thunder…

The Doctor is Out (of Sync)

We couldn’t bring back Crash without reviving his old nemesis, Dr. Neo Cortex. The not-so-good Doctor has constructed a machine to harness the rhythmic energies of Wumpa Islands during the Synchronization Celebration. Once properly channeled, he’ll be able to use his Matrix Chamber to create an army of loyal minions to carry out his most dastardly of wishes. Unfortunately, his plan goes a little haywire when one of Cortex’s minions shows up unannounced.

The machine backfires and begins creating pockets of “bad vibes” all over the Wumpa Islands. The resulting syncopation threatens to shake the whole island apart if they aren’t returned to their harmonious rhythm. Cortex would prefer to keep the island intact and so decides to puts his world domination plans on hold to join forces with Crash Bandicoot and the Skylanders to keep the Synchronization Celebration and the Wumpa Islands from falling apart.

But wait… how does Cortex join forces with them, you ask? Is he like one of those NPCs who gives you advice and stuff as you go along?

Pfffft. Like he would stand for such a thing. Cortex is no one’s talking head. He is a fully-playable character with his own unique move-set, iconic gadgets, exploding mines, lasers, and superior scowls.

Oh, and he’s also got his very own toy. Yes, it is glorious. Look upon that imperious yellow visage and despair. (Or get super-excited… because now it’s a party!)

Thanks for all the Wumpas

We feel fortunate to have had this opportunity to create the Thumpin’ Wumpa Islands level for Skylanders Imaginators. The responsibility of bringing Crash and Cortex back to their fans and to the new generation around the world has been an incredible honor and gift. We hope you enjoy it as much as we’ve enjoyed contributing to the legacy of one of the true video game legends.

David A. Rodriguez and Leo Zuniga

P.S. I’m not saying that if you leave Crash and Cortex on your shelf at night that they will come to life and fight each other for your game-room dominance… but I’m also not not saying it.