Torment: Tides of Numenera is a Strange RPG Coming to PS4 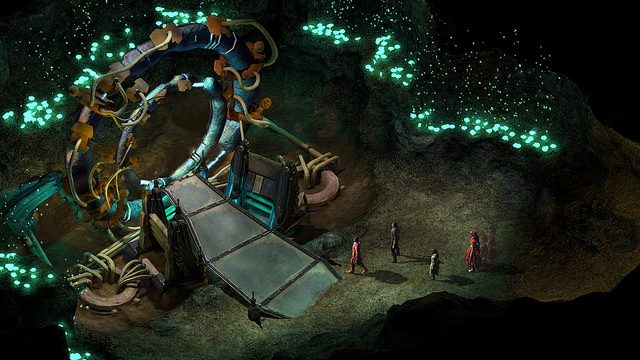 I don’t know about you, but we here at inXile like our RPGs a bit strange.

We want to solve bizarre mysteries, argue with memorable lunatics, and get killed by dangerous artifacts when we press the wrong button. That’s why we’ve been having so much fun making Torment: Tides of Numenera — the entire world is a soaring swan dive into a bottomless lake of delightful weirdness and we’re immensely excited that the game will be coming to PS4.

Torment is set a billion years in the future in a place called the Ninth World. That name isn’t just for show: the people in this world built their cities over the bones and ruins of eight ancient fallen civilizations before them. And the technology of those previous civilizations is lying everywhere, waiting to be discovered and exploited.

You are the Last Castoff, the last child of the Changing God, and you’re born falling from space. Things don’t get easier for you from there. You’re being hunted for reasons you barely understand, and searching for your place in this world. You’ll talk to ancient machine intelligences and friendly cannibal cultists. You’ll play with impossible, incomprehensible artifacts, and you’ll die. A lot.

But that’s okay, because death is rarely permanent in Torment: Tides of Numenera, and failure is sometimes more interesting than success. More often than not, screwing up doesn’t mean a reload because it reveals new paths that you wouldn’t have found otherwise. We set out to make a game you’d want to replay over and over, just to see all the different ways you can change this world.

Your character’s decisions will be fed into our morality system, which is deeper and subtler than “good” or “evil,” and reacts to the kind of person you’re roleplaying. You might become known as a scholar, a brute, a philanthropist, or a passionate justice-seeker, just to name a few. Each choice you make shapes your legacy and the Ninth World itself.

So, if you like intense, reactive, story-driven RPGs full of gloriously weird things that can kill you, check out Torment: Tides of Numenera.