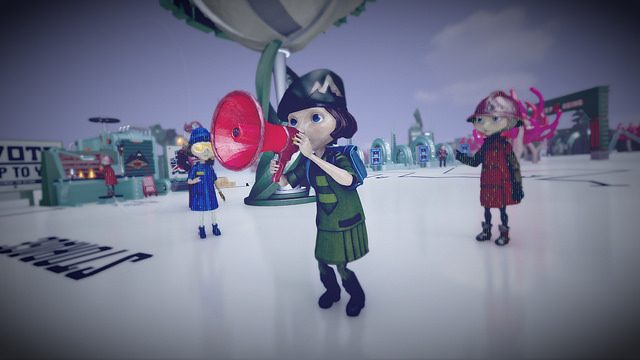 It’s been almost 2 months since we launched The Tomorrow Children and already we have seen some great success thanks to the hard labor and commitment of our proletariat founders who quickly took to our cause.

We have seen all sorts of activities from the players that we have never imagined before, such as a strange sea of letters, and 3D platformer-like play with the trampolines and also group picnics in the void. There have also been other such antics such as human ladders (when a player kneels and another player kneels on top of them and so on and so on until they are a strange human chain of kneeling clones leading up into the sky). And other people simply enjoy trying to stack boxes as high as they will go!

The community has been vibrant, and we have seen some surprising statistics since launch (as of 10/14/2016).

Now, the moment is finally here!

It gives me great pleasure to announce that that The Tomorrow Children will be free for everyone to download and play starting later today. Alongside it, we will also be releasing the “Frontier Pack” ($19.99) which will come with the Bourgeoisie papers, Lv1. Arms License, Lv1. Tools License, EagleCorp Jetpack, 3 avatars and 500 Freeman dollars ($25 value) Those of you who are PS Plus members will also be provided with an exclusive costume!

To celebrate this launch, we will be providing a bonus costume for a limited time! Login to the stage between Oct 26th – Nov 2nd 2016 in order to claim the costume.

We have also released a major update to the game, not only to address some of the user feedback we have been receiving but also simply to add a selection of new content to the game. We’ll be adding new islands, tools, costumes, void powers, facilities, missions and much more. The megaphone, for example, allows for improved communication and will help players cooperate better.

We look forward to seeing you in the void!