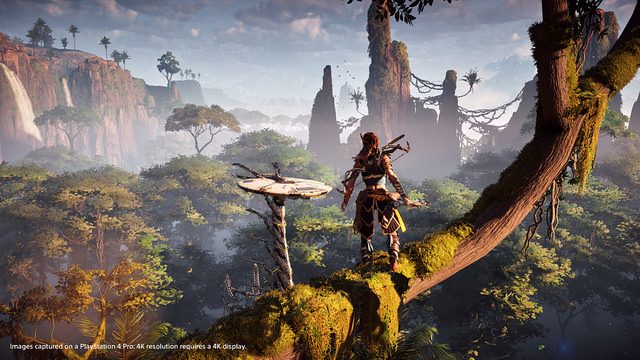 Horizon Zero Dawn is an action RPG set in a lush, post-post-apocalyptic open world in which humanity is no longer the dominant species. Machines, not mankind, rule the Earth.

We’re very excited about HDR, 4K TVs, and PS4 Pro in general, but to be clear, the game we demonstrated at the past two E3s was running on standard PS4 hardware. We’re dedicated to making a game that looks great regardless of the model it’s played on; it will look beautiful on PS4, and will look even better on PS4 Pro — particularly if you own an HDR-compatible 4K TV.

As we showed at the PS4 Pro reveal event last September in New York City, the extra power of the new hardware allows us to get even closer to our vision for a lush and vibrant living world. The extra detail in the natural environment and the enhanced colors really add to the experience.

We’ve used the enhanced hardware of PS4 Pro to do some exciting things for Horizon Zero Dawn’s art style. In the end, it’s up to each developer to make its own decisions that align with the priorities of the title.

For us, Horizon Zero Dawn is all about scope, scale, and visual splendor. Though the game is technically post apocalyptic (or perhaps more accurately, post-post apocalyptic) we wanted to create a vision of nature reclaiming the Earth. PS4 Pro’s power afforded us a number of interesting possibilities to expand this vision even further.

For starters, for players who still possess standard 1080p HDTVs, we’re able to offer far better image quality. We’ve got a number of techniques at our disposal. The most logical one is supersampling. This is a very high-quality anti-aliasing technique, which basically means we internally render at a higher resolution (close to 4K) before shrinking it down to the final 1080p resolution. As our internal calculations are done at a resolution much higher than 1080p, more detail survives before we shrink it down to 1080p, resulting in smoother edges — virtually no jaggies — and a more stable image.

We’re also looking at enhancing the quality of our shadow maps and increasing the quality of our anisotropic filtering. This is a technique which increases the quality of texture sampling, resulting in more detailed environment textures. We still have to tweak these elements of the 1080p output quality for the final game, but we have quite a bit of power yet to play with.

In addition, Horizon Zero Dawn on PS4 Pro will fully support users with 4K TVs, outputting at a much higher resolution. We’re rendering 2160p checkerboard, which is a special technique that looks incredible on a 4K TV. You’re going to notice a ton of subtle details, from stitching on Aloy’s outfit, individual leaves and branches swaying in the wind, kilometers away in the distance, and more detail in all the machines and NPCs in the world.

Then there’s HDR, or high dynamic range, which is a brand-new feature that enhances the range of colors we can display. It’s very exciting and hard to explain as it’s something which most people haven’t seen before, so they don’t know what to expect. You can’t print it, it’s not in cinemas, your phone’s screen can’t do it. The only thing that you can compare HDR with is reality. We normally have to do a lot of work in the engine to take an internal high dynamic range image and then make it suitable to be displayed on a normal TV. A lot of color fidelity gets lost in the process. If you own an HDR-enabled TV, we don’t have to lose that data and you’re looking at the image in its full glory, with brighter and deeper colors, more contrast and vibrancy, in its pristine state. The benefits are truly awesome.

For me as a developer, the most exciting thing about PS4 Pro is that it provides a lot of extra processing power. It will be interesting to come up with different ways to put that additional horsepower to use — from finding more efficient ways to output at high resolution, to giving non-4K players more display options, and much more.