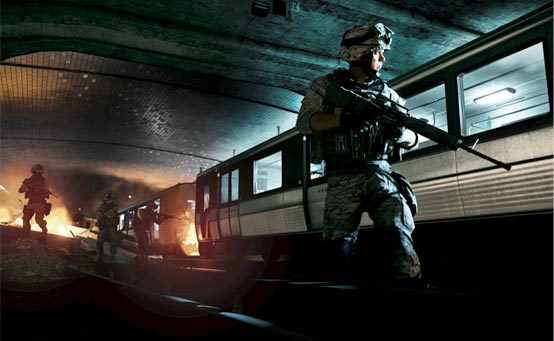 This is Tommy Rydling from DICE, and I’ve got two exciting pieces of news to share with PlayStation.Blog readers. First, we are very happy to announce the dates for the eagerly awaited Battlefield 3 Open Beta on PSN. The Beta is open to all and will run from September 29th to October 10th. You can join it by simply going to the going the PlayStation Store and navigating to the “View All By Title” section, then selecting Battlefield 3 – within there you’ll see the download for the Battlefield 3 demo!

Prepare for battle in the bombed-out metro tunnels on the outskirts of Paris in the upcoming Battlefield 3 Open Beta!

Alternatively, if you have redeemed a Medal of Honor: Limited Edition or Tier 1 Edition Online Pass, you will receive early access via a personal email invitation from DICE that includes 48-hour early access, which will allow you to start playing on September 27th.

The Open Beta is your chance to play Battlefield 3 early, try out our free social platform Battlelog, and give your valued feedback directly to those of us at DICE. You participating in the Battlefield 3 Open Beta means that you are not only helping us load test the servers, but more importantly, helping us fine-tune the final components of the multiplayer game.

During your time in the Open Beta, you’ll be playing on the map Operation Métro – a map you might have seen coverage of from E3, where we won the Best Multiplayer Game award.

But that’s not all for our PlayStation fans! You’ll be happy to know that beginning with our first expansion pack Battlefield 3: Back to Karkand (to be released later this year), all full-blown upcoming expansion packs for the game will appear one week early exclusively on PS3, brought to you by Sony!

As you may or may not have heard, Battlefield 3: Back to Karkand is a themed expansion pack containing four of the most loved maps from Battlefield 2, boldly reimagined in the Frostbite 2 engine. It also features new weapons and vehicles, unique in-game dog tags, new persistence, as well as new Trophies.

Make sure to stay tuned for more on the PS3 version of Battlefield 3 and all things related. And do let us know what you think of the Beta once it’s up and running. For more stories on Battlefield 3, feel free to check out the official Battlefield blog where I post from behind the scenes under the name “H Brun”.

I also wanted to say thank you for your continued support for DICE and Battlefield 3. Meeting our fans in person is always very rewarding and exciting. We went to gamescom with the PS3 co-op mission Exfiltration, and at Tokyo Game Show we let visitors play the single player mission Operation Guillotine. The response so far has been overwhelming, and we look forward to showing you more action from Battlefield 3 before the North American launch on October 25th.